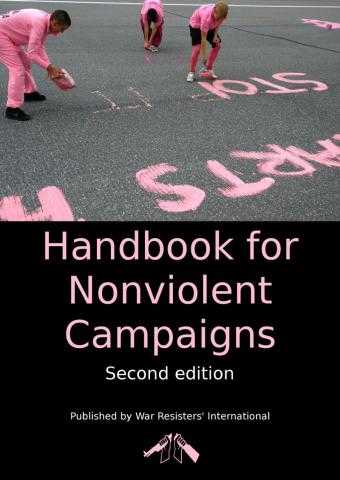 During the first weekend of October the international seminar "War Profiteering and Peace Movement Responses" took place in the sunny city of Barcelona. The seminar was hosted by Justícia i Pau (Centre Delàs) and Fundació per la Pau and organised together with War Resisters' International (WRI) and the European Network Against Arms Trade (ENAAT).

Effective Nonviolence in the 21st Century

Javier Gárate lecture at the Irish School of Ecumenics on effective nonviolence in the 21st century, given in Belfast on October 13, 2011.

Link to the talk: http://www.ecumenics.ie/news/javier-garate-talk/

One week ago I participated in a civil disobedience action together with three friends from the anti-militarist network Ofog. As part of a campaign to mark the places where war starts, we went into the NEAT military test area near the town Luleå in the north of Sweden. Well inside NEAT, we marked a radar station at Palja with a pink banner saying “War Starts Here”. Immediately afterwards we were arrested by a security guard, on suspicion of entering what is called a “protected area”.

During the month of July 2011 almost 200 antimilitarists, from different parts of the world, took part in the activities of “War Starts Here” – The war starts here in a peace camp in Lulea in the north of Sweden. The ten days of activities included the WRI council meeting, a seminar under the same title, trainings in direct non violent action, and a series of actions against NEAT, the North European Aerospace Training base.

Peace action on the military runway of Vidsel airbase

Peace activists from Ofog paint peace signs on the runway at Vidsel air base, which is a part of North European Aerospace Testrange -- an area almost as big as Belgium, that Sweden, Nato and others, are using for war preparations (military exercises).

170 international peace activists from 17 countries today entered the North European Aerospace Test range in a massive act of nonviolent civil disobedience in the north of Sweden. Some 28 activists have been confirmed as arrested or detained, among them activist from Venezuela, Spain, Germany, UK and Finland. At the end of the day, police kept ten non-Swedish activists detained, and interrogated them at the police station of Lulea.

Made in Socialism - taking it as it comes

Opinions are polarised on Venezuela. The western establishment argues that there is a socialist dictatorship while many on the left believe that a true socialist revolution is taking place. Chavez's denunciation of Western military intervention, his rhetorical opposition to capitalist globalisation, and the fact that he has survived an attempted coup make most of the world's anti-war movements likely to sympathise. But there is also disquiet – about the personality cult, about Chavez's own authoritarianism and affinity with other authoritarian rulers, about an economic policy which in reality is based on partnerships with western oil corporations, and for us in WRI the sheer militarism – the creation of uniformed militia, the presence of military officers at the head of “civilian” organisations, the continuing inculcation of a war mentality. At the invitation of PROVEA (an internationally respected human rights education organisation) and the anarchist magazine El Libertario, in May a three-person WRI delegation went to Caracas and also visited the state of Lara.

The global war machine each year, kills directly and indirectly, millions of people, destroying entire communities, and destroing nature. Contrary to the popular image of Sweden, both at home and abroad, Sweden plays a major role in the war industry. Sweden is the world's largest arms exporter per capita, Sweden participates in NATO's war in Afghanistan, and Sweden has the largest practice area for war within its borders.

A military exercise area for war in northern Sweden, a commercially independent but politically very hot area where the US and NATO countries are testing their weapon systems on previously neutral, but now only “alliance-used” land. The exercises also disturb the residents in neighbouring areas, and occur without regard to the UN Indigenous Rights Declaration.

The illegal blockade of Gaza has been condemned by most major international actors. The horrible consequences of this brutal violation of humanitarian law are unacceptable from every point of view. One and a half million people interned on the small strip (45 square km) between Israel, the Mediterranean, and Egypt. The blockade has reduced the transport of goods to and from Gaza by 80%.

Nonviolence - behind the headlines

As authoritarian rulers are finally toppled after decades in power, we have all been reminded of the power a united population can wield through nonviolent action. And again we have seen that the cynical support for dictatorship in the name of stability is a recipe for repression and injustice.

At the same time, there are two grave challenges arising from the events in North Africa and the Middle East for those of us who advocate nonviolent action and campaign against government policies that pursue unprincipled alliances of convenience and arms trading.

This is a newsletter for the international peacecamp “War starts here” in Luleå, Sweden the 22nd to 29th of july 2011.