One week ago I participated in a civil disobedience action together with three friends from the anti-militarist network Ofog. As part of a campaign to mark the places where war starts, we went into the NEAT military test area near the town Luleå in the north of Sweden. Well inside NEAT, we marked a radar station at Palja with a pink banner saying “War Starts Here”. Immediately afterwards we were arrested by a security guard, on suspicion of entering what is called a “protected area”. 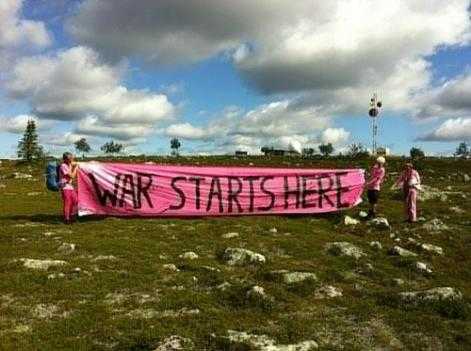 Our action was part of a week-long peace camp, combining seminars and actions, entitled “War starts here – let’s stop it here”. Two days before going to the radar station, we held a mass action with more than 200 people outside NEAT. We wanted to raise awareness of the fact that today’s wars start in the north of Sweden and therefore we can also stop it here. All dressed in pink, the most unmilitaristic colour available, we held a carnival to celebrate life and to protest against the war preparations taking place. After a die-in, we sent 200 pink balloons into the air to demilitarise the airspace as well. With just a handful of police watching, most of us went into the “protected area”, but only the 20 or so people who decided to climb the fence and mark the runway with pink paint got arrested. Most likely, the police did not have the capacity to deal with so many disobedient people. I had prepared myself mentally for my first arrest, a decision that had not been self-evident. So in spite of a successful action, I felt slightly disappointed when nothing happened, and was glad when I got the opportunity to take further action by going to the radar station at Palja. 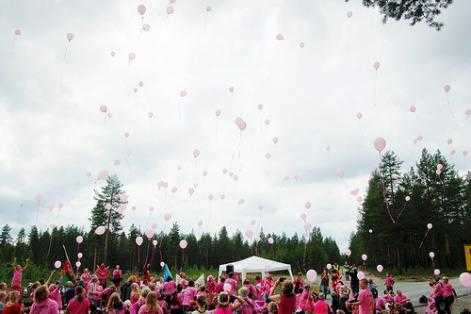 NEAT stands for “North European Aerospace Test-range”. It consists of an area 360 by 100 km of restricted air space and 1,650 sq km of restricted land area (expandable to 3,000sq km) and is Europe’s largest overland test range.
NEAT is open 24 hours per day, 7 days a week, all year around. Tests and exercises at NEAT are carried out by both Swedish and foreign military forces. Between 1966 and 2010, weapons manufacturers and militaries from at least 24 countries trained at NEAT. In 2009 the NATO Response Force had its largest exercise at NEAT.
You can watch a two-minute video about NEAT here: http://www.youtube.com/watch?v=Efy2_eiVKCE

To the radar station Palja

Our expedition to the Palja radar station had started the night before, when we slept in the forest. We then walked the 7-9 kilometres to the radar station through a beautiful forest -- which absurdly enough, is also a nature reserve. In this part of NEAT, there is no fence, just a sign every 30 metres telling us that we were entering a restricted area. I was glad to have the company of people who are skilled hikers and know how to navigate with map and compass. Along the way we picked cloudberries and blueberries, and stopped to cool down in a stream. We also saw a moose with two young calves and had the company by two rare birds called “lavskrike” in Swedish. The only downside of the nature experience was the billions of mosquitoes that partied on our blood.

Our arrest was as undramatic as it could possibly be. Since this is a military area, the security guards have some police authority. However, at the radar station there was only one security guard waiting for us and we could see him several hundred metres away. As agreed before-hand, I went to talk to him while the three others made sure we got photos of our pink banner mailed away before all our phones and cameras got confiscated. As with all ofog actions, we always behave nonviolently, we take responsibility for our actions, and are prepared to defend them in court. After the arrest and showing our ID, we sat down to wait for the police and had a picnic next to the radar station while we enjoyed the incredible view. We chatted with our guard and the other guards which joined him about the bear and reindeer research project in the area. The police never bothered to come and pick us up, and after three hours one of the security guards drove us out of the “protected area”. Here our friends picked us up and drove us back to the peace camp where we had a warm welcome.

To my own surprise, this civil disobedience action has been one of the most empowering experiences I have ever had. The decision to break one small law in order to prevent much bigger crimes was for me a truly liberating feeling, and I hope my action will encourage others to do the same, to finally take a little step in order to say no to what you believe is wrong. In spite of spending more than a decade in the peace movement and most of my adult life together with people who consider civil disobedience a normal activity, emotionally there is a huge difference between supporting it and being part of it.

It is bizarre to now know that I’m now a suspected criminal because of this action to prevent the war crimes and crimes against humanity which are prepared in Norrland. I expect to be questioned by the police rather soon, and we will most likely have a court case which results in a fine. Nevertheless, I will carry my new identity as a criminal with great pride, knowing I have sisters and brothers in crime around the world fighting with nonviolent means for a just world without war. Hopefully more people will join us next year in Luelå to question a “security law” which protects war preparation rather than people.

More about the campaign in English here:
http://warstartshere.com/en

For those of you who read Swedish, look here:
http://www.warstartshere.com/nyheter

Majken Jul Sørensen is active in Ofog in Sweden. She is a peace researcher and currently writes about nonviolence and humour as a method for challenging power relations.