Diego Garcia: the Biggest Military Base in Africa 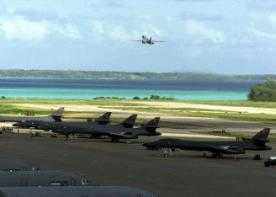 The Island states of Africa often get forgotten. The word “the continent” somehow leaves them out. And this is a serious conceptual error when it comes to scrutinizing the US military presence in Africa.

The Republic of Mauritius in the Indian Ocean is part of Africa. So, any military base on Mauritian territory is therefore in Africa and, as such, concerns us for the coming War Resisters’ International meeting in 2014.

How come so few people in Africa even so much as consider this military base on Diego Garcia as concerning Africa, let alone being in Africa? And who ought to have democratic control over it? Do the people of the US know what goes on there in their name? What atrocities committed from it, or on it? How did Mauritians lose democratic control over Diego Garcia, even before they got it? Are Mauritians concerned? Are we in Africa, as a whole, concerned?

Africa’s De-Colonization not yet complete

As all British colonies were moving towards Independence in the 1960’s, the British Government, a Labour one at that, behind the backs of its own people, stole some Islands from its two Indian Ocean colonies, Mauritius and Seychelles, and, consciously moving in a direction counter to the historical process of decolonization, set up a brand new colony with these stolen Islands. The bizarre name of this anachronism is the “British Indian Ocean Territories”, or BIOT for short. BIOT was never recognized by anyone except its diabolical creators. Seychelles later claimed back, and quite naturally got back, its Islands. The UN declared the annexation of Mauritian territory by Britain illegal. OAU and Non-Aligned Movement resolutions confirmed and reconfirmed this logical stand. But, it all remained outside of the knowledge of the broad masses of any people, except the Mauritian people. I can bear witness to the fact that in the 1970s, when I spoke about this issue to well-informed political activists from all over the world, including from Britain, Tanzania, South Africa and the US, they at first thought I was confabulating. Only professional diplomats knew about the base. They knew because of the repeated resolutions in all the international forums.

The British State, as its empire closed down, was not acting alone.

As you will have guessed, it was acting in cahoots with the expanding US military. Their shameful joint acts were cloaked in organized secrecy that has been called a “conspiracy” by the British High Court in an important judgment in the Bancoult case in 2000.

Forced de-Population of part of Mauritius

Together Britain and the US Government proceeded to “depopulate” these Mauritian Islands, the entire Chagos Archipelago, including the main island, Diego Garcia. Diego Garcia had been the most beautiful of all the pristine atolls in all the world’s turquoise-blue oceans.

The people who had lived there for 200 years were tricked, starved and ultimately forced off the Islands. Their dogs were gassed by British and US military personnel, before the very eyes of their loving carers. As a warning. The men, women and children were then herded on board ships and down into their holds, transported across the sea to main Island Mauritius, and dumped on the dockside. They were left to their own devises there, in the capital, Port Louis, where working people were, themselves, right then caught up in the vortex of the “race wars” or communal violence provoked by the anti-Independence party. There was mass fleeing in different directions, and there was the “separating out” that happens during ethnic violence, as what was once “a community” splits. There was a State of Emergency. British troops kept curfew. Independence had to be declared at midday, instead of midnight. For security reasons. The poor of Port Louis were scared, jobless and hungry. And it was they who took in the Chagossians. Chagossians, who were not only completely penniless and dispossessed, but disoriented, and living in that kind of confused mourning that only mass displacement produces. A sadness that often leads to death.

The US Military Base

All these crimes were committed so recently, not in the days of the Conquistadores, not even 200 years ago. They were committed in cold blood in our lifetimes in order to set up a military base on African land.

It is our responsibility as Africans to get the base closed down.

The crimes continue to multiply

And the crimes have multiplied.

Diego Garcia has become a nuclear base. Nuclear submarines are even serviced there, once they had to be removed from Italy following demonstrations there.

The illegal bombing of Bhagdad with the Orwellian name “Shock and Awe” used Diego Garcia as trampoline for many of its B-52 sorties. Civilians were just wiped out in the midst of an advertisement for the fire-works of armaments.

A wedding procession in Afghanistan was annihilated, an entire extended family wiped out, in an attack that set off from Diego Garcia.

Illegal renditions took place on Diego Garcia. These were denied until the lies and denial could finally no longer be maintained. The admission came in the British Parliament.

And now as the Treaty for a Nuclear Arms Free Africa, the Pelindaba Treaty, comes into force for the first time, where does this put Diego Garcia? The African Committee on Nuclear Energy (AFCONE) has been set up. Its offices are supposed to have been set up in South Africa. Have they? If so, does anyone know where they are?

The short answer to the question of the military base is that it is now illegal for an additional reason. The treaty is a binding one. The base thus needs to be closed down.

However, there was the question of the “dotted lines” around Chagos in the map that goes with the Treaty. These dotted lines refer to the fact that Chagos is Mauritian territory, thus part of Africa, but that the Chagos is militarily occupied by the UK and US.

In 2010, Britain concocted a new conspiracy around Chagos, a conspiracy neatly exposed by WikiLeaks Cables, thanks to the whistle-blowing of Julian Assange. This conspiracy was to set up a “Marine Protected Area” around Chagos while ignoring the nuclear base there, and while pretending that the BIOT was part of UK territory. The Mauritian State has hauled Britain before the tribunal of the UN Convention on the Law of the Sea, and has won the first battle: to get the case heard.

Movements in Mauritius Against the Miltiary Base on Diego Garcia

There has long been a strong movement in Mauritius for the triple aim: close the base, de-colonize the whole of Mauritius, re-unify the country and its people and give proper reparations to all those displaced and their families. LALIT is part of this movement.

The original lease agreement between UK and US – illegal as it always as been –expires in 2016. The expiring lease states that negotiations for an extension should begin in 2014. So, LALIT has helped set up a common front called the “Diego Committee”. In July 2013, it has begun a campaign of posters, leaflets and neighbourhood meetings, to build up to a new challenge to force the Mauritian Government to act against the UK for illegal occupation, and to call for the closure of the military base.

We want to join forces with everyone in Africa who wants to close down US and other military bases, keep AFRICOM (The US’s Africa Command) out of Africa altogether, and also to find out what the US Embassy’s “State of Forces Agreement” (SOFA) outlines for each country in Africa. We have to fight the military encroachment, inch by inch. In Mauritius, the Diego Committee has just launched a boycott call to all associations and other civil society organizations of US money.

Lindsey Collen is a member of LALIT