Colombia: legal progress as the reality of daily violence continues

Andreas and Hannah from the Right to Refuse to Kill programme visited Colombia in November 2012 to meet new antimilitarist groups, reconnect with existing contacts, and to plan new ways in which WRI might provide useful forms of international accompaniment. Many of the groups we met are members of ANOOC - Asamblea Nacional de Objetores y Objetoras de Conciencia – a nationwide assembly of groups that work on conscientious objection. 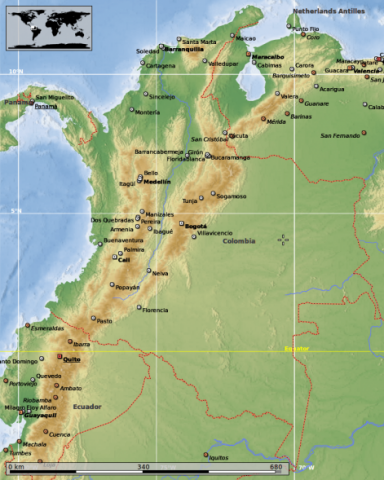 Colombia has endured almost 60 years of armed conflict, engaging left-wing guerillas, right-wing paramilitaries with government armed forces. This has been complicated by the narco-trade, with Colombia being the highest producer of cocaine in the world until very recently. Our visit coincided with 'peace talks' between the Colombia government and FARC (Fuerzas Armadas Revolucionarias de Colombia) in Cuba. Whilst there was some limited optimism for the efficacy of these negotiations, there is also scepticism about the process and the likely outcome.

War Resisters' International has been working with the antimilitarist movement in Colombia on conscientious objection in particular since 1995, and more closely since 2006, providing accompaniment in individual cases – especially in cases of recruitment of conscientious objectors – and also lobbying international institutions and of the Colombian government.

Over two weeks in Colombia in November, we visited Bogota, Manizales, Neiva, Cali, Villarica, Toribio, Medellin, Cucuta, Bucaramanga and Barrancabemeja. This report will tell you a little of what we found when we visited these places, and the plans for work that came out of these meetings. It is organised into issues, with details of how WRI will be working on each issue, where applicable. At the end there is more detailed information on the groups that we met with. If there are contact details not listed and you would like to contact one of the organisations, get in touch with us at hannah@wri-irg.org and we can share email addresses.

In Cali, the third largest city in Colombia, we heard from Colectivo Orienta about the daily violence faced by those living in the barrios. This is at the hands of gangs active in the barrios.

Toribio is a rural village in the Department of Cauca. In and around Toribio FARC have a presence – and last year a bus-bomb killed three people. Earlier this year, the people of Toribio successfully expelled FARC from their territory by dismantling their nearby camp, as well as briefly preventing police access to the region – in a bid to remove 'all armed actors' from their community. However there remains a constant and visible military presence in the town, with as many as 40 soldiers present in the town square most of the day. 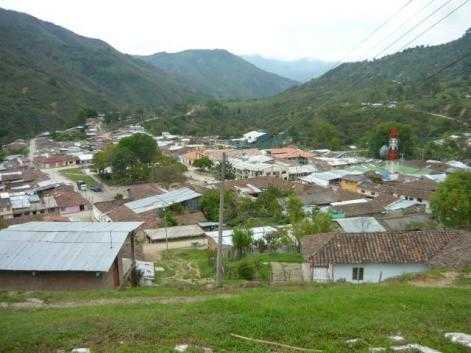 Toribio is 10km away from the village of Tacueyo, the site of a massacre last year which the Colectivo Minga in Cali told us about. 25 people were killed in a falsos positivos. Falsos positivos (false positives) are scenarios fabricated by the military, in which civilians or conscripts are captured or killed and it is claimed, inaccurately, that they are guerillas. This is often accompanied by false evidence e.g. planting guerilla materials on the victims. In Tacueyo, in March 2011 a group of young people attended a recruitment event for FARC. It is likely that they were given incentives to attend, probably cash payments, and had not yet committed to joining the guerilla. They were not armed, nor were they in uniforms. The operation was presented as a successful operation against the guerilla – despite the fact that many of those killed were under 18. Colectivo Minga are writing a book about this crime to raise awareness of the massacre.

Barrancabemeja, the centre of the oil extraction in Colombia, has been under the control of paramilitaries for over ten years, who enforce a kind of 'social cleansing', targeting minorities. Members of antimilitarists groups are also at risk, and some have had to leave the city for short periods to ensure their safety. Death threats from the paramilitaries are frequent (see CO Update December 2011 and Informe al Comité de Derechos Humanos, 2009). It is used as a site of money laundering for drugs gangs.

Lack of right to conscientious objection

This law has not yet been passed, and therefore, there is currently no legislative procedure to achieve CO status – in practice the right does not exist at the moment.

In the absence of such a law it is possible to apply for a tutela (a writ for protection), which will ensure a CO is not recruited. This is rife with problems: not all applications are accepted, and even when applications are accepted, the lack of the libreta militar results in discrimination (more of this later). Moreover, there is a real shortage of lawyers who understand the tutela process for COs.

Our visit coincided with developments on a law proposal that would regulate the right to conscientious objection, and create a compulsory substitute service. It would also create a National Committee of Conscientious Objection to Military Service (Comité Nacional de Objeción de Conciencia al Servicio Militar), which will have the authority to judge applications for conscientious objection.

Soon after our return, on 11th December the law proposal passed through its second reading in the Senate. It must now pass through the House of Representatives, and will return again to the Senate for a third reading. ACOOC (Acción Colectiva de Objetores y Objetoras de Conciencia) in Bogota is commenting and lobbying on the law proposal.

There are different views amongst antimilitarist groups in Colombia regarding this law. Whilst some are willing to work with the Senator proposing the law in order to ensure the law is in line with international standards, others are concerned the law will actually make the situation for insumision (total objectors) – worse.

Batidas are recruitment raids that take place in the street. If a man cannot produce a libreta militar (a card that he receives on completion of military service), then he can be recruited then and there. WRI has been engaged in campaigning in on batidas for many years, including reporting to the UN Human Rights Committee in 2009 This form of forced recruitment has been condemned by the United Nations Working Group on Arbitrary Detention, the UN Human Rights Committee (see CO Update August 2010), and the Constitutional Court of Colombia, which in December 2011 ruled that the military is not able to compel anyone to perform military service.

Despite these condemnations, we heard of batidas are continuing in Caldas department (in the towns and villages around Manizales, although not in Manizales itself), where there is fear in speaking out publicly against them. We were also told of them occurring recently in Barrancabemeja, Bucaramanga, Neiva and around Bogota and Medellin.

In this locales, local antimilitarist groups are working either to gather information on batidas, or to raise awareness about their illegality. These include Acción Colectiva de Objetores y Objetoras de Conciencia in Bogota and Objetores y Objetoras de Conciencia de Neiva, whose website has a form where victims of batidas can submit information: http://objecionhuila.wix.com/antimilitarista#!__items

No Me Presto in Bucaramanga have produced a 'Batidas for Dummies' guide – accessible here, whilst a new antimilitarist group in Cucuta have arranged 'flash mobs' – performances in the street to raise awareness of the illegality of batidas.

During batidas, COs are particularly at risk. In the past, one way that WRI have provided accompaniment to groups that support COs is through the carnet objetor/a (objector card). When batidas take place in the street, COs have shown their card, and often – not always – the military have moved on and left them alone. The cards have a photograph of the cardholder, the WRI logo and statement of principles, and extracts from international law that protect the rights of conscientious objectors.

There are different ways in which discrimination comes into play vis-a-vis conscientious objection in Colombia.

1. Discrimination on the basis of a CO's motivation e.g. religious or non-religious (political).
2. Discrimination against those who do not have a libreta militar. A libreta militar is issued on completion of military service. Not having one exposes the person to discrimination. For example, you are unable to graduate from university, do not have access to government jobs, and often are unable to work in other organisations as well.

We found that the vast majority of groups we met value international support through WRI – they feel it makes a difference. Many do not work on conscientious objection as an isolated issue, but see it – as WRI does – as a part of a nonviolent struggle.

Having reconnected with old contacts, and made new ones, there may be applications for affiliation to War Resisters' International, which would be good for WRI and, we hope, for the groups themselves. Many Colombian antimilitarist groups are strong and have an energetic and active membership, however small. Many are working against high barriers. For example, Quinto Mandamiento in Barrancabemeja have had death threats, and have also worked on lesbian, gay, bisexual and transgender rights, despite 'corrective' rape of lesbians and attacks of gay men in the street in their town.

It's clear that there are stark differences between the situation and tensions present in each region, with some districts facing guerillas, others paramilitaries, the impacts of falsos positivos and other violence from the army, forced recruitment and suppression of antimilitarists. For example, the experiences of indigenous and Afrocolombian communities are distinct (indígenas are not conscripted, whilst Afrocolombians face other racism and equality issues). There is also a variety of responses from those local authorities with human rights mandate e.g. defensoria and personeria.

Groups we visited in Colombia

Bucaramanga
No Me Presto / nomepresto@gmail.com 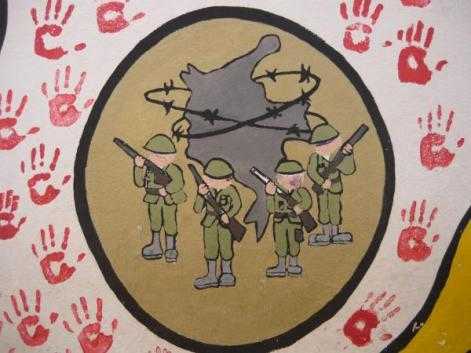 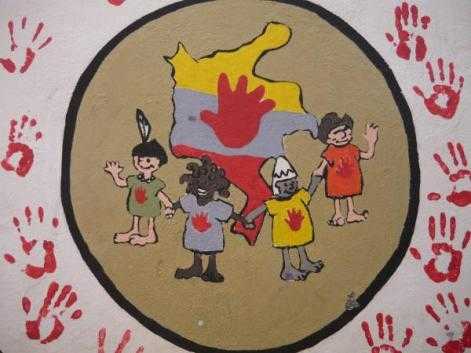