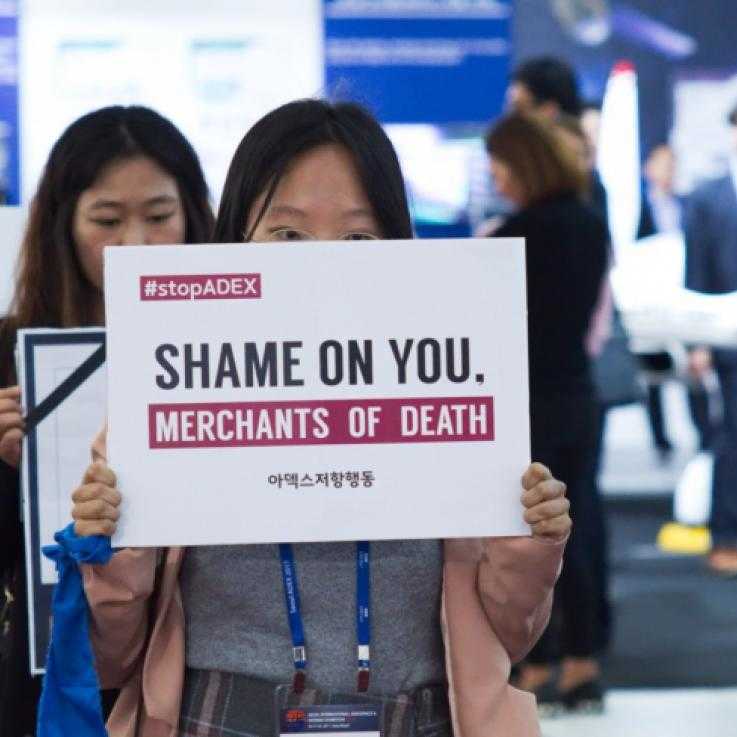 In October, groups in New Zealand and South Korea have taken direct action against arms fairs and weapons expos taking place in their Auckland and Seoul.

In November 2015, 27 Peace Action Wellington (PAW) activists were arrested for protesting peacefully outside the Weapons Conference in Wellington. 15 of them faced trial last week. Over the course of seven days in court fifteen charges of obstruction, trespass and disorderly behaviour were dismissed or found not guilty due to lack of evidence. In their statement, Peace Action Wellington said
Read more

From 14th-20th November 2016, Auckland Peace Action – a grassroots group based in Auckland, New Zealand – disrupted a weapons expo and military conference held in their city with a 'Week of Peace', with activists blockading the entrances to the exhibition centre and meeting a visiting US warship with a peace flotilla. In 2015, the same expo was held in Wellington, where it faced similar resistance. The event links the arms industry with government agencies, and it's principle sponsor is Lockheed Martin.

On 16th and 17th November, over 500 arms dealers planned to meet for an annual gathering at the Viaduct Events Centre, and were met by a blockade of the entrances, with more than 100 people linking arms and disrupting several entrances to the building, despite violence from police and security. Aukland Peace Action estimated that only 130 delegates made it into the conference. The blockade included participants from a wide number of groups, including Pacific Panthers, No Pride in Prisons, Auckland Action Against Poverty, the Student Housing Action Group, Save Our Homes, Peace Action Wellington, the Quakers, Pax Christi, Racial Equity Aotearoa, Asians for Tino Rangatiratanga, the Health Sector Workers’ Network, Palestine Solidarity Network, West Papua Action Auckland, union members, climate activists, environmentalists, faith-based activists.

A protester was violently arrested at a pre-Anzac Day demonstration at the Ministry of Defence staged by Peace Action Wellington on Monday 18 April to mark the Global Day of Action on Military Spending.

The peaceful protest highlighted the government’s recent invitation of US warships to Aotearoa, and spoke out against out against military spending.

New Zealand: Creative and challenging memorial to a World War One CO

Activists from Peace Action Wellington (PAW) organised two days of nonviolent direct actions against the annual Weapons Conference held in New Zealand (NZ) last November. Following their peaceful protests, dozens were arrested and taken to court. 26 activists returned to court on 18 February to defend their right to peaceful demonstration. As an outcome, 25 protesters are still facing charges and were remanded to appear again on 11th March.

Activists from Peace Action Wellington (PAW) organised two days of nonviolent direct actions against the annual Weapons Conference held in New Zealand (NZ) last November. Following their peaceful protests, 27 activists - 26 of whom keep fighting charges - were arrested and taken to court. On 18 February they are standing trial again, defending their right to peaceful demonstration for peace and justice.

Sending our solidarity messages to the activists in Wellington, we reached Valerie Morse from PAW and asked her about their campaign Stop the Weapons Conference as well as many other questions on militarism and the antimilitarist movement in New Zealand.

According to an article in The Dominion Post, the New Zealand Defence Force is targeting children in its recruitment campaigns. The New Zealand Defence Forces have spent NZ$20m on advertising in the last three years, including a "new push" to get kids thinking about "exciting opportunities" in the military, so the Dominion Post. Part of this budget includes a new reality TV show aimed at children. Defence Force director of strategic recruitment, Commander Nigel Philpott, said continuous recruiting prevented a ''black hole'' in training.

Some New Zealand First party politicians are in favour of re-introducing conscription but they have little backing over this opinion.