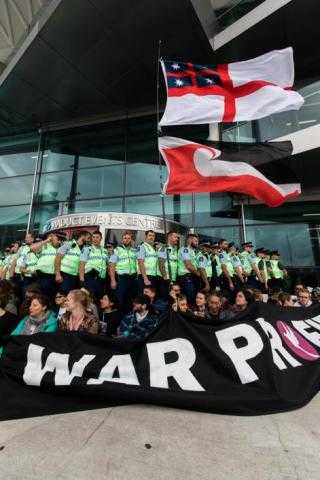 From 14th-20th November 2016, Auckland Peace Action – a grassroots group based in Auckland, New Zealand – disrupted a weapons expo and military conference held in their city with a 'Week of Peace', with activists blockading the entrances to the exhibition centre and meeting a visiting US warship with a peace flotilla. In 2015, the same expo was held in Wellington, where it faced similar resistance. The event links the arms industry with government agencies, and it's principle sponsor is Lockheed Martin.

On 16th and 17th November, over 500 arms dealers planned to meet for an annual gathering at the Viaduct Events Centre, and were met by a blockade of the entrances, with more than 100 people linking arms and disrupting several entrances to the building, despite violence from police and security. Aukland Peace Action estimated that only 130 delegates made it into the conference. The blockade included participants from a wide number of groups, including Pacific Panthers, No Pride in Prisons, Auckland Action Against Poverty, the Student Housing Action Group, Save Our Homes, Peace Action Wellington, the Quakers, Pax Christi, Racial Equity Aotearoa, Asians for Tino Rangatiratanga, the Health Sector Workers’ Network, Palestine Solidarity Network, West Papua Action Auckland, union members, climate activists, environmentalists, faith-based activists.

The conference also coincided with the New Zealand navy celebrating it's 75th anniversary, with invitations extended to 33 countries to send warships, planes and soldiers to take part in the International Naval Review. The US Navy dispatched the USS Sampson, the first time a US Navy vessel has visited New Zealand in 32 years. Activists set sail to in a peace flotilla to meet and disrupt the arrival of the frigate in the port, including a USS Go Home Stay Home submarine.

Other actions through the week included prayers by indigenous groups, reclaiming their sacred water from the grip of the military, a “wall of noise” on the second day of the conference, and peace education events.