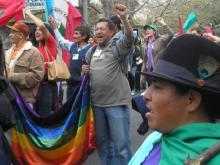 CONAMURI, as the acronym indicates, is the national coordination which groups together rural and indigenous women’s workers’ organisations, the first of its kind in Paraguay. On 15 October - the International day of the rural woman - CONAMURI celebrated their tenth anniversary during and their Fifth National Conference under the title “A decade sewing the seeds of hope, constructing equality”
CONAMURI and the National Coordinating Committee for Peasant Organisations (MCNOC), the Campesino Paraguayan Movement (MCP), the Organisation for Land Struggles (OLT) and the recent newcomer Popular Agrarian Movement (MAP) are all members of Vía Campesina Paraguay.

Throughout the past decade, CONAMURI has continued the struggle in keeping with the principles of Vía Campesina International, a global organisation which unites peasant workers, indigenous populations, populations of African descent and small-sized producers from 69 countries throughout the world. The organisation unites men and women in the struggle to ensure that their ways of living and livelihoods are respected. It also works towards ensuring respect for their common interests, thereby rejecting the agro-export model and dependence-based economies which our countries suffer due to the dominance of foreign capital.

As mobilised, active women, our major concern is the advance of agro-business in rural areas and its catastrophic impact on the local population, displacing 70,000 rural workers to the cities. This forces them into overcrowded areas where they fall into the clutches of poverty, surviving in a precarious situation whereby their future is uncertain. Agro-business promotoes mono-culture and the excessive use of chemical products, leading to the accelerated degradation of biodiversity and the contamination of waters and soil.

Indigenous communities also suffer from the devastation of their ancestral lands. By hitting the most sensitive and vulnerable nerve in our society, these consequences are all the more deplorable, from all perspectives. A few weeks ago, for example, 13 members of the Mbya Guarani community, one of the most militant groups in the face of the colonial regime, died as a probable consequence of the exposure to pesticides used in the cultivation of transgenic Soya near their settlements. This area is located in the Department of Caazapá and it was the Department that took unprecedented emergency measures obliging Ministry of Health staff to take matter to the appropriate authorities, despite attempts to play down the incident by private interests linked with the guild of producers.

We are certain that the agro-businesses, interested in producing bio-fuels from our foodstuffs, so as to satisfy the Asian and European markets, will do so to the detriment of our families, our lands and our natural resources. This will lead to a further increase in unemployment, hunger and needs of our people in general. The impact of this on family life can already be seen in the labour migration trends which show that many women have been forced to go to Spain and Argentina, thereby distorting the family nucleus of society. Via Campesino's response to this is to work for Food Sovereignty combined with Integrated Agrarian Reform. Both concepts are reflected in the struggles of CONAMURI and the peasant movement in Paraguay. We are committed to social change, which began in April 2008, with Fernando Lugo’s electoral victory - the first defeat in 61 years for the conservative Colorado Party. However, to be honest, the current Government has allowed itself to be pacified by the lullabies of capitalism, and the persecution of peasant movement leaders has even increased during the current government’s mandate. The criminalization of social movements has also reached unprecedented levels.

Our eagerness to stimulate debate on Food Sovereignty has led us to mobilize within various Departments within the country, bringing together people at grass roots level, providing information so as to raise as much awareness as possible. We carry out, among other activities, departmental courses and workshops, community radio programmes, a news bulletin which is broadcast via the CONAMURI website and, above all, the successful Seed Campaign, which ended in July after two years of hard work.

Another of the organization’s activities is based on reporting cases of intoxication due to the massive use of agrochemicals in fields. The producers of soya and other transgenic crop producers form a caucus of landowners - many of them of Brazilian origin - who do not respect the minimum conditions stipulated in national environmental laws, such as maintaining the structure of natural barriers, not fumigating when it is windy, separating crops from human settlements, etc. Therefore the oligarchy expels men, women and children by destroying their ranches and animals, so as to be able to expand their desert of green Soya.

The memory of the 11 year old boy, Silvino Talavera, is still etched in our minds. He was sprayed with Round Up Ready in 2003, and he died a few hours later in a hospital in the Department of Itapúa. His case was one of the few that came to court, and the accused were sentenced to two years imprisonment in 2005. However, this sentence was reduced to a non-custodial sentence. CONAMURI, through the support it affords to solidarity based organizations, both national and international, promoted the campaign, “Justice for Silvino”, which culminated in legal action being taken against the guilty parties at the time, two Brazilian tenant farmers.

Continuing this logic of resistance, CONAMURI is part of the Coordination for Victims of Agro-toxics, which was founded this year. Its aim is to increase visibility regarding the reality of many Paraguayans who suffer the effects of Glysophate, as well as the multinationals who promote these substances. This coordinating body presents cases and reports of people who have been affected by the use of toxic substances used in farming to the appropriate authorities. The effects of such substances vary from causing miscarriages and embryonic deformities to cancer and, in the worst cases, death.
On the other hand, just to cite an example of a project carried out by Via Campesina International, this year work started to set up a university for rural workers and indigenous populations, thereby promoting the Engineering in Agro-ecology qualification for 2010. The Guarani Latin American Agro-ecology Institute (IALA) will have its headquarters in the district of Capiibary, Department of San Pedro. We are currently in the process of creating the institute, which will be used as a cornerstone for a grass-roots based, de-colonized education system, which ensures that the students interpret reality based on their own experiences, within an international context. The Guarani IALA has been a dream in the making for many rural workers’ and indigenous organizations, as it symbolizes the education of a future generation of professional militant individuals who will stand against the destructive and exclusive neo-liberal model. They will have a different perspective on class, and they will be equipped to create sustainable development models, while safeguarding the culture and values, which they have been robbed of by the current economic, political and social regime.

It is also worth mentioning the global campaign against violence towards women, which Via Campesina will launch on 25 November, the international day against violence against women. As an organization of working women/ female workers, we fully support this campaign. and will take various actions to help raise awareness in society. Violence against women is a major structural problem, as it is rooted in the negative values which perpetuate patriarchal societies and the supposed superiority of one sex over another. This attitude represents a huge step back for us. We, as women of CONAMURI, want a society where there is gender equality, which does not deny anyone opportunities based on gender or social class. We believe that as more women participate in decision making processes, it will be possible to create profound structural change, which will lead to a re-evaluation of women’s roles in the future of their countries. It is just a question of justice and respect for dignity.

Therefore, for all the reasons cited above, CONAMURI works in collaboration with other rural workers’ and indigenous organisations, believing that Agrarian Reform is the only way to satisfy our peoples’ demands. Also, we believe that success can only be achieved through solidarity in the struggle against capitalism which plunders, mutilates, slaughters, alienates and makes Paraguayans ill. Via Campesina Paraguay raises the flag of socialism. Because we are women, mothers, who give life, and we know for certain where to find the enemy of the social transformation we are seeking. This change is our commitment for the present and future of humanity.