Conscription is enshrined in art. 40 of the Constitution, which states: "(I) All citizens have an obligation to carry out their sacred duty to defend the security of the homeland and to respect its Constitution and the socialist union system. (II) Military service is compulsory and is regulated by law."

The present legal basis of conscription is the 1953 National Service Act. [10]

All men between the ages of 18 and 40 are liable for military service. [2]

Reserve duties apply up to the age of 50 and can consist of six months' training. It is not clear to what extent reserve training actually takes place - as in 1991 there was actually no reserve service. [2]

Exemption is possible for domestic reasons (for instance in the case of only sons) and for serious medical reasons. [2]

Young men living abroad in Arab countries can be exempted on payment of a fee. Those who have worked in the Gulf states for five years, or who have finished their studies in Europe or the USA, may be exempted from military service on payment of USD 5,000. According to the Syrian embassy in Washington DC in 1990, such exemptions are allowed only if the person concerned has lived abroad for more than ten years and has reached the age of 35. [2] [3]

All Jews are exempt from military service. [2] [9]

All young men must register for medical examination at their local conscription office at the age of 18. [2]

The right to conscientious objection is not legally recognised and there are no provisions for substitute service. [2] [4]

The National Service Act apparantly provides for some kind of substitute service. According to the Syrian government in 1985: "Under the National Service Act, military service can be waived, postponed or replaced by an alternative service in certain cases. These cases must be provided by law in order to make allowance for the special circumstances and needs of citizens, particularly those pertaining to religion, health and social position." [3]

But provisions for substitute service have never been introduced. The Syrian authorities stated in 1980 that they would not recognize the right to conscientious objection as long as Syria remained threatened by Israel. [8]

The government has stated several times that there have been no known cases of conscientious objection in Syria. [8] [13]

Draft evasion and desertion are punishable under the 1950 Military Penal Code, as amended in 1973. [7]

Quitting the country without leaving behind an address, hence evading call-up is punishable by three months' to two years' imprisonment plus fines. [6]

Under art. 102 desertion in face of the enemy is punishable by life imprisonment. [6]

Execution is allowed under art. 102 (deserting to enemy ranks) and art. 105 (deserting in the face of the enemy during wartime after conspiring to do so). [6]

The Syrian authorities have contrived several means of tracking down draft evaders.

After registering for military service young men receive a document containing full details about their service, including whether they are entitled to postponement. They must have this document with them at all times, so that the authorities can at any time check their details. [2]

When an 18-year-old does not register with the conscription office, or does not register in time, he is regarded as a draft evader and thus is liable to arrest by the military police and the security forces. [2]

Students who have not yet performed their military service must get special permission if they want to go abroad. [2]

Syrians who have been abroad are routinely interrogated by the authorities if they return to Syria. Border control is known to be strict, especially at airports. [2]

In the 80s death sentences were passed on deserters to the enemy, but there are no known cases of executions in recent years. [1] [2]

The Syrian government has threatened to seize the property and assets of ‘military evaders’, namely Syrian refugees outside the country and internally displaced people, who fail to pay exorbitant fees to be exempt from military service.

Don't be a soldier of the invasion!

On October 9th, Wednesday, Turkish President Recep Tayyip Erdogan launched an invasion into northern Syria. This invasion is an attempt to destroy the political, cultural and economic rights of the Syrian Kurds.

Turkish Armed Forces are the major military power of this initiative, supported by a group of Islamist gangs under the name of the Syrian National Army. Erdoğan’s aim with this operation is to destroy the Kurds. He also opens up space for ISIS to operate.

This is an illegal war that contradicts international treaties.

Exiled conscientious objectors from Turkey published a call to refuse the war in Northern Syria: “Refuse! Resist! Don’t be a soldier!” They declared: “This is an illegal war that contradicts international treaties. Those who make the decision to invade, those who participate in it, and those who offer support should know that they are committing a crime against humanity!”

Syria is going through the deadliest conflict that the 21st century has witnessed so far, with half a million people killed, over a million injured, and more than 12 million displaced. Millions of Syrians escaped from war and sought asylum in other countries. In this CO-Update, we are sharing the stories of two of those who could escape from conscription in Syria, and are currently based in Germany.

CO recognised in part of Kurdish Syrian region of Rojava 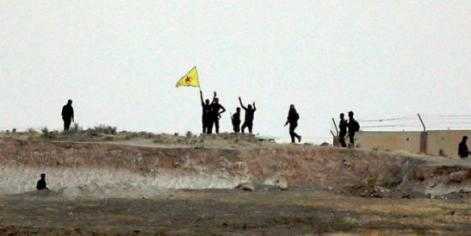 We previously reported in CO Update that conscription had begun in Rojava, a de facto autonomous Kurdish region in Syria. Now, the government of Cizre canton has recognised the right to conscientious objection.

SYRIA: nowhere to run from conscription

In Syria, there is nowhere to run from conscription. Depending on where one is located, young men, and in some cases also women, are drafted to fight in the civil war.

Syrian Kurds arrested and forced into the military

In April, Syrian Kurds who refused “compulsory military service” were arrested by the Kurdish security forces and taken to detention facilities before being transferred to the 'fighting fronts'. Dozens of young men were arrested at checkpoints in the city of Sere Kaniye, in Hasakah province. The controversial conscription law was introduced in mid-2014, and obliges citizens aged between 18 and 30 to join the People's Defence Service (YPG) for six months.

In a move seen as an attempt to address widespread discontent in the
country, Syrian president Assad issued Legislative Decree No. 35 for
2011 on 19 March 2011 lessening mandatory army conscription from 21
months to 18 months. The decress will come into force on 1 June 2011.
In 2005, military service had been shortened to two years.

11. The Committee takes note of the information provided by the delegation whereby Syria does not recognize the right to conscientious objection to military service, but that it permits some of those who do not wish to perform such service to pay a certain sum in order not to do so (art. 18).

The State party should respect the right to conscientious objection to military service and establish, if it so wishes, an alternative civil service of a non-punitive nature.