SYRIA: nowhere to run from conscription

In Syria, there is nowhere to run from conscription. Depending on where one is located, young men, and in some cases also women, are drafted to fight in the civil war.

Bashar Assad's army has dwindled from 350,000 to about 200,000 since the conflict started four years ago. Over 80,000 soldiers and pro-government militiamen are believed to have been killed. The fear of being drafted to the army to be cannon fodder, to kill and be killed is one of the reasons leading people to flee the country and seek refuge. According to the Syrian Observatory for Human Rights there are at least 70,000 men who have dodged compulsory military conscription.

In Raqqa, and other areas under the control of Daesh (ISIS), all men and boys over the age of 14 have been asked to register at the local police, threatened by being to be severely punished. People living in the areas held by Daesh fear this is the beginning of conscription . Daesh are already known to train children, and use child soldiers, paying families to send their children, but if conscription starts, it will drag many uninvolved civilians into the war, blurring the lines between civilians, soldiers and members of Daesh.

In Syrian Kurdistan, conscription was introduced in July 2014, requiring all men of the ages 18-30 to join the defence forces (YPG) for six months, and arresting those who refuse to serve. In order to escape the army, many have escaped to Kurdish, Iraq and Turkey, the UN reports more than 111,000 internally displaced Kurdish refugees in Iraq. In one of the refugee camps in Iraq, a demonstration was held, protesting against PYD conscription, saying they support Kurdish nationalism, but do not support mandatory army service. 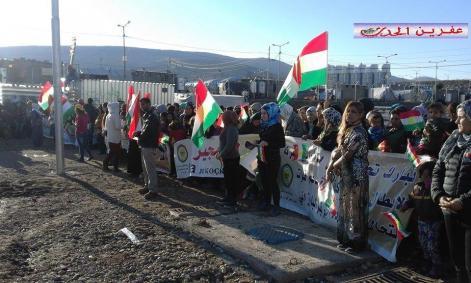