VR-DER was in Amed on International Conscientious Objection day 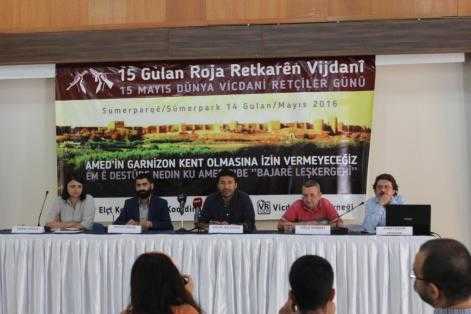 On May 14 and 15, the event titled "We Will Not Let Amed Turn Into Garrison Town" that we as Conscientious Objection Association (COA) together with Tahir Elçi City Forest Coordination have organized ended in 15th May.

On the sessions held on Saturday, May 14 in Sümerpark Reception Hall, many topics from conscientious objection (CO) movement to anti-war movement and to militarization of cities in war. On the first session, Merve Arkun, co-president of COA, talked about the position of CO struggle in anti-war movement; Davut Erkan, attorney of COA talked about the legal aspects of CO; Opuz Sönmez, member of COA talked about the history of CO movement. Ahmet Özgür Erdoğan from Patika Ecology Collective held a presentation and talked about ecologic destruction as a strategy of war.
On the second session, Murat Alökmen, president of Construction and City Plannning of Diyarbakir Municipality talked about the current legal process about the Tahir Elçi City Forest. Nihat Kıratlı on behalf of Mesopotamia Ecology Mevement talked about the ecological descruction continuing in the region.  The first day of the program ended with  the forum on common line of struggle against war and ecological destruction. 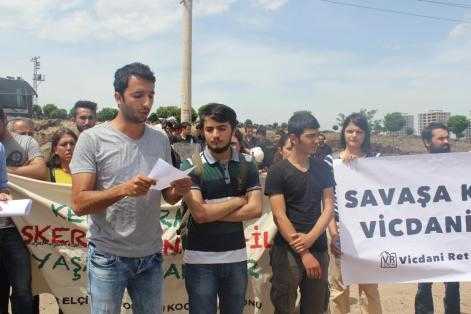