Sadankomitea or Committee of 100 in Finland is a long-time affiliate of War Resisters’ International, and last year it became a section of WRI. This hopefully signals the beginning of closer cooperation with the rest of the WRI family.

The history of the Committee goes back to Hiroshima Day 1963 when approximately sixty young pacifist students gathered to have a meeting in the centre of Helsinki. Inspired by the activism of Bertrand Russel and the Committee of 100 in the United Kingdom, they decided to found their own politically and religiously nonaligned peace organisation.

From its early days on the Committee has worked against militarism and for sustainable peace and disarmament. While the organisation has also participated in demonstrations, direct action and other forms of public protest, Sadankomitea’s focus has been on research and advocacy. The Committee is known for its thinkers rather than its marchers. Our work covers a broad range of topics from youth work and general antimilitarism to targeted campaigns e.g. against killer robots, conscription or arms trade. 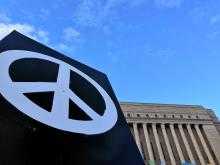 Much of the Committee’s work consists of political advocacy. We participate in a number of global, regional and national campaigns and networks focusing, for instance, on specific disarmament questions. One of our core roles in the Finnish peace movement is to be a “watchdog” of security policy. With lobbying, statements and spreading information we actively try to promote better decision making and inclusive public discussion. We do our best to make sure peace doesn’t remain just sweet talk but turns into actions.

In recent years one of our most inspiring projects has been our Youth Peace Ambassador training where we train 18–29-year-olds in peace work. The training includes both knowledge about current issues and methods and tools for activism and advocacy. With the training we aim to educate youth for a better tomorrow and help them find a way to promote sustainable peace in their lives. To date we have trained about 100 youth with a variety of backgrounds and from all over the country.