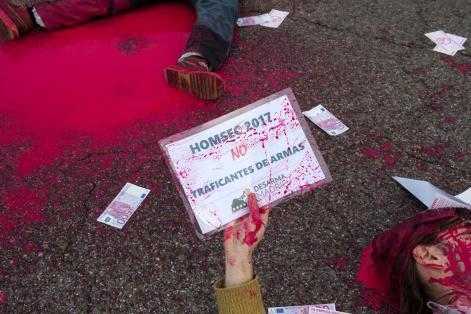 Since the end of the Cold War, military spending by most states has increased, becoming a structural issue, even as government spending in other areas has descreased. However, the armament cycle has not been restricted just to military spending. Scientific research, manufacturing, and now more openly the arms trade, are indicative of a context in which the division between public and private interests -and responsibilities- becomes increasingly diffuse.

The Puerta del Sol area of Madrid is normally the sentimental heart of Spain's capital, but from 14-16th March it became the centre for European arms innovation. The exhibition and events venue IFEMA (Feria de Madrid) hosted the sixth edition of HOMSEC, the International Exhibition of National Security Technologies. Over 16,000 square meters, terrestrial, naval and aerial technological prototypes of the military industry were deployed; an opportunity to promote mortar systems, missiles, drones, supersonic anti-ship missiles, ammunition and advanced artillery, many of which were publicised as "tried and tested" Products that have been used in war zones”, such as the West Bank, where popular protests are excellent testing ground for repressive “crowd control” methods, that have caused thousands of deaths.1

Although Spain ratified the Arms Trade Treaty (ATT), "Treatise regulating the international trade in conventional arms, from small arms to tanks, combat aircraft and warships” HOMSEC provided an exceptional meeting point for sellers and buyers of arms and security equipment, people and entities committed to war and the privatization of security through hired contractors. Approximately 1.5 million euros were earmarked for the fair,2 an expense that many communities considered excessive and superfluous, but was defended by the Ministry of Defense as an investment (failing to mention that most of the military expenses in Spain are distributed, if not camouflaged, among other ministries, in order to hide the real cost from the public).

HOMESEC took place at a large exhibition centre, and even featured in tourist guides, almost as an an attempt to depict Spain's business sophistication, and trying to consolidate the exhibition as an essential element in Europe's 'defense' calendar. Spain is the sixth highest arms exporter in the world.

However, the extravagance of the event that sought to give a friendly face to the war -destached from its consequences- did not prevent its opening being interrupted by the presence of a large group of activists from different organizations, who disturbed the solemn ceremony through nonviolent action. As an alarm sounded – as if announcing a bombing - the first activists with signs reading “DESARMA MADRID” (Madrid's civil society platform that hosted multiple social organizations taking action against the fair), and “MOC's Antimilitarist Alternative”, appeared at the main entrance of the compound.

In turn, representing the echoes of foreign wars in Libya, Syria, Yemen, Palestine or Iraq, fomented and sustained substantially by arms sales, some activists spilled red paint on their bodies and lay in the road, representing the foreign blood split in war. Twenty activists were temporarily detained by the police, and a harsh administrative penalty contemplated by the gag law (ley mordaza).3

The intervention by the social movements was accompanied by the reading of the official manifesto of the Desarma Madrid campaign (which 126 organizations have joined). A protest of support in the Puerta del Sol after the arrests took place, alongside a debate4 proposed by the United Left of Madrid in which each of the demands of the collective and the implications of the realization of the HOMSEC fair were glimpsed. Faced with the pressure of civil society, Madrid City Council disengaged from the event and requested the removal of their logo from the brochure of the event5, However, the president of the Autonomous Community, led by the Popular Party (PP) did not disengage from the fair, and this led to the irrefutable questioning of exactly - according to the slogan of the protest - who are the warlords.

In Spain, after the end of the dictatorship of Franco in 1975 the country was involved by a strong resistance of certain sectors of the extreme right and the army to accept a democratic system, until 23 of February 1983 (also known as 23F) some military commanders took the city of Valencia and made a failed coup d’état. The same ex-army colonel, former detainees or implicated during the 23F, now are presidents and principal managers of the Grupo Atenea, a lobbying business structure that tries to influence the various state agencies to increase military spending which is also dedicated to consultancy and advice for private enterprise like TASER, MBDA, Navantia, ISDEF and others of the leading companies. Its Also the principal sponsorship of the fair.

In this way, the fair is run by a mixture of public and private interests which are difficult to differentiate insofar many coordinators of the event, belong (or were belonged) to both worlds, generating that over the last few years the numbers of visitors and exhibitors increase significantly with more and more exhibition sectors.6

Thus, various anti-militarist groups denounced not only the private sector involved in the HOMSEC fair, but also the public entities that facilitate its materialization under the false dilemma of freedom versus security that seeks to justify in Security National the cut of a primordial right. They also called for a shift in immigration and asylum policy, to ensure the safety of victims o

f war, and the outsourcing of border control to prevent the arriving of thousands of refugees.

Meanwhile, Desarma Madrid and other platforms will continue their work to question the social and militaristic order, and work to replace it with an activism in response to the state's reaction to the so-called "terrorism", which demonstrates the serious difficulty (or lack of will) in democratically administering the rule of law, social movements continue to trouble official delegations whose patriotic narcissism justifies military waste; The new endemic evil of our affluent societies deeply vitiated by economic interests.

1 Avner Benzaken, head of the Israeli Army's logistics and technology unit, says that "if they developed a product and wanted to test it on the ground, they only had to go 5 or 10 kilometers from their base". See more at: http://arainfo.org/20-activistas-detenidos-tras-una-accion-en-la-inauguracion-de-la-feria-de-armas-homsec/

2 Historical average of investment of the fair since its first edition. See informative dossier: http://www.utopiacontagiosa.org/2017/01/30/dossier-informativo-contra-la-feria-de-armas-homsec/

3 Citizen security law that came into force in 2015, makes a set of legal reforms and leave administrative infractions in hands of the Security Forces. Within it, it is considered as a serious violation (with penalty of € 601 to € 30,000) "to cause disorder in public spaces when citizens' security is obstructed, obstruction of authority, disobedience, refusal to resolve meetings in transit places” (…) among others.