National service in Eritrea: 'slavery by another name'

Eritrean National Service: Since the mid-2000s nearly all reports on Eritrea have consistently reported that human rights conditions have deteriorated drastically. Nearly all basic human rights are violated and the indefinite military service, torture, arbitrary detention have made it impossible for many Eritreans to remain in their country. Thousands of Eritreans flee the country each month, often taking unimaginable risks posed both by government policies as well as unscrupulous smugglers and traffickers capitalising from the atrocities in Eritrea.

In Eritrea conscription into the ‘national service’ is compulsory for all men and unmarried women between the ages of 18 and 50 . Although the law limits national service to 18 months, since the border war with Ethiopia in 1998, demobilisation has generally not taken place, in the exceptional circumstances a conscript has been ‘demobilised’ it is through unofficial channels (often through personal contacts).

Since the final year of high school is only provided in the Military Service Training Centre (Sawa Military Camp), children as young as 16 can be recruited. During the round-ups that target potential draft dodgers and absconders, children under the age of 18 have been caught up and inducted, trained and deployed for national service. Many recruits report to have been subjected to violence and ill-treatment for alleged ‘defiance’ or following a failed escape attempt. Although many women are ambivalent about reporting it, recruits say it is well known that many women are subjected to sexual violence from military commanders.

Given that recruits aren’t currently required for active military duties, much of their time is spent in what the government calls ‘developmental activities’ under a plan known as Warsay Yikealo Development Campaign. This involves mainly, hard labour in construction and agriculture, including working for construction companies owned by the ruling party and even individuals associated with the ruling party (PFDJ). The conscripts are paid $15 per month and have to pay for their food and subsistence out of that.

Inevitably the net effect of the current status of Eritrea’s national service has been detrimental to the recruits, their families and communities and ultimately to Eritrea. The unprecedented outflow of refugees and particularly the nature of the journeys has also had implications for the wider region and further afield, as the number of vulnerable refugees in need of support continues to spiral.

Given the length and nature of the national service, patriotism and a sense of duty are no longer the factors maintaining it. The regime uses force and often brutal force, to capture young people and recruit them into the national service and then to keep them stationed in remote areas of the country away from their families with little or no break for years on end. Those who attempt to flee and are unsuccessful, are detained and severely punished often using methods that can only be described as torture. Many former recruits report to have fled the country following several episodes of beatings and maltreatments in the various detention facilities operated by the regiments. Sawa training centre, Kiloma training centre, Wia training centre have all got some of the country’s most notorious detention facilities. National service recruits are also said to be held in facilities at Dahlak Island. Many recruits die during those punishments or subsequently as a result of injuries sustained.

The nature of hard work recruits are required to engage in, often under harsh climates of the training facilities and areas of deployment, in the absence of basic provisions, often means many recruits become ill and those with pre-existing conditions are even more vulnerable to health deteriorations. The training and deployment areas are extremely poorly equipped to deal with the volume of need. Since one of the few ways of ‘official’ demobilisation is ill health, authorities tend to respond to requests for medical attention negatively; as a result many have died unnecessarily or contracted serious illnesses. Many flee to save their lives from such unnecessary death and illness.

Cradle to Grave: Recently the regime has also started a programme of arming and training older people (up to the age of 75) for ‘duties’ in their respective areas. People are required to report to their local administrative areas from where they are sent to military training facilities, the same ones, in harsh and inhospitable location, used for National Service Recruits. Following training they are then deployed to do night patrols in their neighbourhood and also guarding government institutes such as banks. Due to their age and fraility many suffer illhealth and emotional distress both during the training and with the additional responsibilities on top of their regular work.

Militarization is neither safeguarding national interest nor providing valuable experience and opportunities for the young people serving; to the contrary it has become detrimental to Eritrea and all Eritreans. The indefinite national service is a major cause of the Eritrean refugee crisis including human trafficking and hazardous crossings over the Mediterranean.

Eritrean groups will be holding a demonstration in Geneva on Friday 26th June, in support of the COI report. See the poster below, or visit http://www.stopslaveryineritrea.com/ 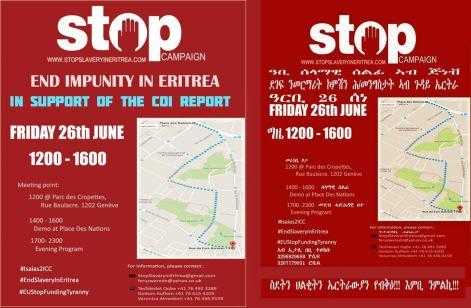