Corruption and the arms trade

The global trade in arms is a business that counts its profits in billions and its costs in human lives. It is arguably the most damaging of all trades, accounting for around 40% of all corruption. It has massive influence on the way our governments operate, ensuring that war is a preferred option to diplomacy, and that we spend billions of dollars every year on weapons we often don’t need. It perpetuates, makes more deadly and sometimes even causes conflict and repression.

Global military expenditure is estimated to have totalled $1.77 trillion in 2014, that is more than $250 for every person on the planet. This was a fall of 0.4% on the previous year and is about 2.3% of global GDP. 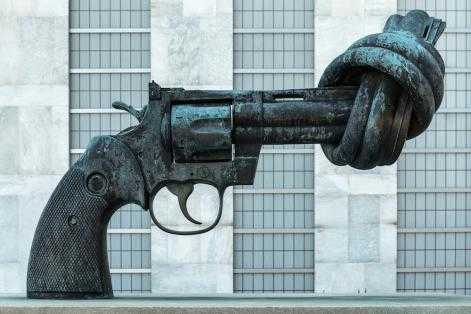 Even during the global financial crisis from 2007 to 2012, weapons spending increased by 24%. Arguably, Greece was pushed over the fiscal cliff by two multi-billion dollar, corrupt deals with Germany.

The small arms trade is worth at least $8.5bn a year. But its deadly impact is far greater than the sum suggests. Across the world, it is estimated that every year about 526,000 violent deaths occur through warfare and murders. The majority of these deaths are caused by small arms.

While obviously an important dimension of national defence, a tool of foreign policy and a contributor (albeit overstated) to the economy, the arms trade, big and small, has additional profound impacts on the world: from the enabling, fuelling and perpetuation of conflict & repression, to the corrosion of democracy.

Arms deals, stretch across a continuum of legality and ethics from the official, or formal trade, to the grey and black markets, what I refer to as the Shadow World.

In practice, the boundaries between the three markets are fuzzy. they are often intertwined and dependent on each other. With bribery and corruption commonplace, there are very few arms transactions that do not involve illegality, most often through middlemen or agents. Many arms dealers who provide services to large defense companies and governments, continue to operate in the black and grey markets.

Joe Roeber calculated that the trade in weapons accounts for almost 40% of all corruption in all global trade. The US Department of Commerce, in a study of 5 years of corrupt transactions involving US businesses, found that half were in the defence sector.

Why is the arms trade so susceptible to corruption?

Roeber argues that the arms trade is hard-wired for corruption. The very structure of the trade explains the prevalence and nature of the corruption that characterises it. You have contracts worth a vast amount, being decided on by a very small number of people behind a national security imposed veil of secrecy; these are perfect conditions for rampant corruption.

The consequences of this corruption, and the efforts to conceal them, include the corrosion of democratic institutions and the rule of law in buying and selling countries, greater instability in fragile states, massive opportunity costs especially in relation to socio-economic development and sometimes an undermining of the very national security that the deals are supposed to bolster.

Those involved in the trade wield enormous political influence through the phenomenon of the revolving door: the movement of people between positions in government, politics, the military, intelligence agencies and defence companies. The consequences of this are a distortion of policy making - not just in the ascendancy of war-making over diplomacy, but also in foreign and economic policy decisions. A crucial dimension of these arrangements is the link between defence companies, arms dealers and political parties: the trade plays a crucial role in party political funding.

This national security elite wields enormous power while they are enriching themselves, and operate in something of a parallel legal universe, as they seldom face the legal consequences of their often illegal actions. By way of example, of the 502 violations of UN arms embargoes that we recorded, two resulted in legal action, one in a conviction.

I experienced this industry at first hand in South Africa where the nascent democracy was profoundly undermined by a $10bn arms deal, in which $300m of bribes were paid to senior politicians, officials and my own political party, the ANC.

Asia has suffered greatly at the hands of the arms trade, as victim and perpetrator. Wars have been fought on the continent to ensure that the producing countries of the Global North are never short of demand for more and more weapons. While internally, most Asian countries have seen authoritarianism, military rule and, even in democracies, crony capitalism, all helping the domestic weapons industries to flourish, as arms were bought way beyond the needs of the purchasing countries.

The US spends almost as much on defence as the rest of the world combined. Its weapons business is built on a circle of patronage between defense companies, lobbyists, lawmakers, the White House and the Pentagon (where 84% of retiring senior officers in 2010 went into senior executive positions with the very companies to whom they had awarded contracts during their careers).

This system of legal bribery has numerous deleterious consequences: perpetual war, coups, and other undermining of client countries, as well as massively wasteful spending at home. This is evidenced in the F35, a fighter jet that will cost the American taxpayer near enough a trillion dollars but is irrelevant to the sorts of the conflicts the US is currently engaged in and is likely to be involved in for generations to come.

Another example is the political pressure exerted on South Korea to buy American in the early 2000s. The country spent $4.5 billion dollars on an American plane that was more expensive and less able than rivals, but America made clear that South Korea would be deprived of American political support and prevented from accessing a range of military technologies. Worse though is the way in which the US continues to ferment antagonism and conflict in the region, to the benefit of its own global position and the well-being of the military industrial complex.

European arms makers are no better. The German company Ferrostaal paid over €1.1bn in bribes in 16 different countries, including over €42m to an agent in South Korea who had previous convictions for bribery and was known to have close connections to senior politicians in the country.

In the past few years the South Korea defence industry has moved its focus from its own domestic needs to exporting, particularly to the region. The country’s exports have risen from $144m in 2002 to $3.6bn in 2014, with an average annual gain of 31% over the past five years. The impact of this growth, fuelled by technological co-operation with the US, is both destabilisation of the region and the further entrenchment of a militarist mind-set. South Korea has also sold weapons to conflict-ravaged Iraq, troubled Indonesia, belligerent Turkey and human-rights-abusing Azerbaijan, to name but a few.

Crucially, the sale of weapons inevitably leads to “blowback” – the phenomenon of weapons being turned on those who provide them – in a vicious cycle of ever more weapons and growing conflict. The space for peace gets ever smaller, as the profits for the weapons-makers get ever larger.

The trade in weapons is astonishingly under-regulated, because there is no political will to control it. It is up to us to make the biggest arms dealers of all, our political leaders, change their ways, through boycotts both political and economic, protests and direct action. Because if we simply accept the status quo as unchangeable, the trade in arms will continue to make the world a poorer place, a less democratic place, a more corrupt place, and a more dangerous place.

Andrew Feinstein is the author of “The Shadow World: Inside the Global Arms Trade” A film based on the book will be released in early 2016. A former ANC Member of Parliament in South Africa, Andrew is currently Executive Director of Corruption Watch UK in London.