Antimilitarist Resistance Against a Swiss Parliament Out of Control

Swiss activists have been protesting against the purchase of war drones from the Israeli company Elbit Systems. On 25th May, activists blocked the entrance to one of Switzerland's biggest military bases, where members of the Swiss parliament planned to watch a demonstration of the Hermes 900 drone. This was just one of several actions Group for a Switzerland Without an Army (GSoA) took during the last session of the Swiss parliament.

From an antimilitarist perspective, the summer session of both national chambers was hard work, because it gave many opportunities to protest. The security committee prepared a lot of laws that needed to be prevented. For some of these our protests was successful but for others, unfortunately, not. There were mainly five laws we were working on: a reform of the Swiss army (WEA), two laws which increase the competences of the secret service and allow more mass surveillance (BÜPF & NDG), the purchase of a new military transportation aeroplane, with which they would conduct compulsory deportations of migrants, and last but not least the purchase of six war drones from the Israeli arms company Elbit Systems Ltd.

Activists from different organisations - Gruppe für eine Schweiz ohne Armee (GSoA), Boycott, Divest and Sanctions against Israel (BDS), Collective Urgence Palestine (CUP), and independent activists - blocked the entrance to the planned presentation of the Hermes 900 drones, that Switzerland is planning to purchase. No vehicles could go through the main gate of the military compound in Thun, which the members of the security committees of both chambers have been invited to. 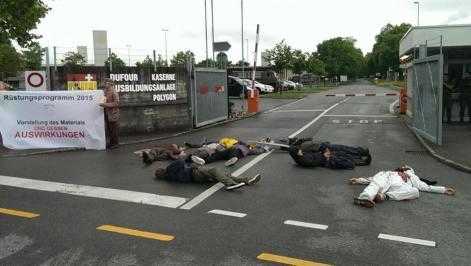 After the demonstration, the Swiss members of parliament decided to buy six surveillance drones from the controversial Israeli arms manufacturer Elbit Systems, which is directly contributing to violations of international humanitarian law. As offsets to the purchase, Swiss companies will upgrade the Hermes 900 drones with high end technology. A lighter shell and high resolution video technology will be transferred to the Israeli arms factory and will in the future be used in Gaza as it has been done in the past. Human Rights Watch documented the deadly use of these war drones in their report “Precisely Wrong”. Children Defense International accuses the Israeli army of having killed 164 children in the last operation “Protecive Edge” last summer, using war drones like the Hermes 900. This is a clear violation of international humanitarian law and therefore a war crime. Especially since the appointment of the new Israeli government, future war crimes committed by the Israeli forces cannot be excluded. Last year, the freshly appointed justice minister Ayalet Shaked called openly for the murder of unarmed civilians. Other members of the new far right government let us fear a new escalation in this long lasting conflict. This makes it very probable that Swiss technology will be used in future war crimes. The fact that Elbit Systems is contributing to violations of international humanitarian

law led the Norwegian government to stop funding the company by the states pension fund in 2009, and other big financial institutes did the same (https://stopthewall.org/divest-elbit). This deal will be a direct contribution to war crimes. It is not only against Switzerland's policy of neutrality but also fails to fulfil international obligations under the 4th Geneva Convention. It is a shame that Switzerland plans to contribute technology to vi

olations of international humanitarian law - instead of preventing them from taking place.

The purchase is also very disturbing, because the European flight control organisation Eurocontrol emphasised beforehand that the Hermes 900 will be not be able to fly autonomously over Swiss territory until 2028. Until then it has to be accompanied by a manned aircraft at all times, or the operating air space has to be blocked for civil aeroplanes. The only conceivable operating area would be above open sea. Considering that Switzerland is landlocked, it is very likely that the drones will be lent to Frontex or other institutions to control the outside borders of the Schengen space.

The militarisation of border control

This is where our different projects come together. Advocates of the surveillance drones and new transport plane have argued that the increasing migration flow from the Middle East and Africa to Europe make the purchases necessary. After the tragedies in the Mediterranean Sea, the EU, Frontex and Switzerland quickly identified the so-called human traffickers as responsible for the uncountable deaths. Instead of lifting the inhuman fortress, which makes a mass grave out of the Mediterranean Sea, they decide to strengthen it with military means. The planned UN Security Council resolution under chapter VII prepared by the EU and the UK shows how determined they are to fight migration with the means that caused the migration in most cases in the first place: bombs and military interventions!

For those migrants who somehow make it to the mainland, racist mobs wait for them and burn their homes as we can see it in Germany right now. But also in Switzerland and Austria and around Europe, similar things happen. So instead of guaranteeing the human right of asylum, the authorities try to prevent migration in the first place and if they still arrive here they get expelled as quickly as possible. Both became duties of the military forces. Migrants who had to escape their countries because of war and military operations become targets again of military forces because they are seeking asylum. This is a disgusting tendency, that one can observe in Switzerland and elsewhere. The militarisation of border control is a very serious issue, that antimilitarists around the globe need to work on.

For some technical reasons, the reform of the army didn’t pass. It goes back to the small chamber and then we will see how they will precede. The two secret service laws passed with a vast majority. Different organisations, left parties, and IT-companies are preparing the collection of 50,000 signatures need to to provoke a referendum against these two laws. Despite our protest, the big chamber decided to buy the six war drones for 250 million Swiss francs. The only thing we could prevent during this session was the purchase of a new transportation air craft. A mixture of direct action, lobbying and press work led to this success. Regarding the actual tendencies in European border control, it is an important success. We will continue to fight against the purchase of the six war drones and the contribution to war crimes they will make. The small chamber will vote on it during the next session in September right before the national elections. If we manage to make arms deals and Swiss contributions to wars worldwide one of the hot topics during this elections, we might have a chance to prevent them from buying them.

In any case it will be a hot summer. We are prepared for some action!