Women say no to NATO! 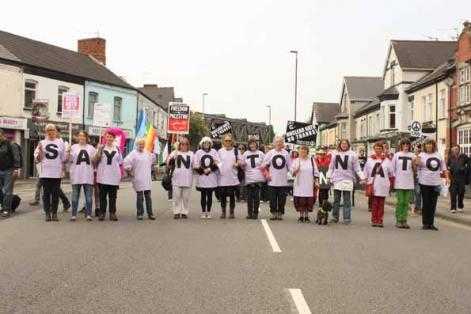 As women of the No to War, No to NATO international action network we join in wholehearted condemnation of NATO as an aggressive, expansionist, nuclear armed military alliance. Its creation fostered decades of Cold War, its continued existence has perpetuated armed conflicts and wars, and its intention is clearly to assure long-term worldwide control by the USA and its allies in the interests of global corporate capital.

As women too we have a gender specific case against NATO. On the one hand women suffer in acute and particular ways in armed conflict. On the other we have unique and under-recognized capabilities and opportunities for peace-making. Expenditure on militarization means funds diverted from public and social services such as health, housing and education of crucial importance to women, who worldwide carry by far the greater burden of care work, both paid and unpaid.

We observe with interest the energy with which NATO has recently been “mainstreaming” gender policies into its structures and operations in the name of implementing UN Security Council Resolution 1325 of 2000 on Women Peace and Security. We note its appointment of a woman Special Representative to the Secretary General on this theme.

And we state unequivocally that Resolution 1325, instigated by women’s organizations at the UN, is and has never been intended to be a mechanism for “improving” militarism, or making war “better for women”. The “security” promoted by the defence industry and military is very far from women’s meaning for the word: “human security”, the well-being of all people.

A feminist analysis developed and activated by women of diverse cultures and on every continent, identifies patriarchy, the power system of male dominance, in malign partnership with capitalism, nationalism and colonialism, as a root cause of war.

We call for a radical reinterpretation of masculinity and its divorce from militarism, violence and domination, in the interests of both women and men.