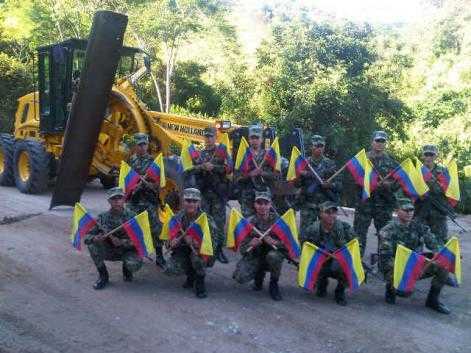 The Colombian armed forces, with 281,400 military personnel, are the second largest army in all of Latin America, surpassed only by Brazil. Added to that are the 159,000 members of the National Police, a militarised police force that reports to the Ministry of Defence. In Colombia there are 6.2 soldiers per one thousand inhabitants, a ratio almost four times that of Brazil.

The Mining and Energy Battalions are composed of 80,000 troops, accounting for 37% of all land-based Army forces, which they're a part of, and almost 30% of the entire armed forces.

The mass militarisation of the extractive zones has not meant greater security for nearby populations. Censat Agua Viva and Mining Wacht Canada warned that 'the regions rich in resources are the source of 87% of forced displacements, 82% of human rights and international humanitarian law violations, and account for 83% of all assassinations of labour union leaders1. The purpose of these units, despite what would seem reasonable, is not to provide public safety but to safeguard foreign investment and the mining and energy extraction.

A number of these battalions are located within the premises of the companies or mines, as in the case of Military Battalion 15, located since October 2011 within the oilfields of the transnational Pacific Rubiales, in Puerto Gaitán, where the company also provides vehicles and fuel. Or the Energetic Transport Battalion Number 8, located on the lands and installations of Frontino Gold Mines in the municipality of Segovia, as indicated on the web page of the Ministry of Defence.

The collaboration between the army and investors is fluid. As stated by the Army's director of operations, Colonel Jorge Arturo Matamoros Blanco2, the army analyses the projects that the investing companies undertake and are assigned to the corresponding military division for their protection.

Even though the military authorities have always denied it, there is evidence that the extraction companies' protection leads to the negotiation of private 'agreements' between extractive businesses and the Armed Forces, in which the companies pay large sums to the army in exchange for security and the ability to carry out their plans. These agreements are secret but have come out in the media through investigative journalism3 or because the managers of the companies themselves have unashamedly divulged the information.4

The affected local communities view the military deployments with distrust, as they don't feel their interests are being protected by the government security forces. They believe that the troops are are there to ensure the extractive activities, in open contradiction with the communities' traditional ways of life and the environment that makes it possible.

The presence of the army has been accompanied by serious human rights violations in such areas, including rapes of women and extrajudicial executions of those who oppose the mining projects. One of many cases reported was the September 2006 murder of Alejandro Uribre Chacón, who opposed the huge mining project of Kedhada SA in the south of Bolívar province, murdered by troops of the Nueva Granada Number 2 Anti-air Battalion and subsequently presented as an armed guerrilla who fell in combat, twelve days after having lodged a formal complaint that he was being persecuted by the army due to his having lodged complaints against the mining company5.

Another significant case relates to the Army's aiding the entry of the Muriel Mining Corporation in Norte del Chocó, where it supported the company's activities despite a fraudulent public consultation, as ruled by the Constitutional Court6, restricted the mobility of ancestral inhabitants within their lands, and provoked serious abuses and the internal displacement of indigenous and Afro-Colombian populations7.

Thus it is obvious that even though these military units are deployed in areas where the conflict with the guerrilla insurgency has been most serious, which is the argument used by the government for their existence, the key goal is the defence of the transnational companies against the legitimate territorial rights of indigenous, farming and Afro-Colombian communities. This activity provokes major social conflicts, massacres and forced displacements directly related to the invasive policy, much of it carried out in collusion with the army, paramilitaries and companies.

7'We have been forcibly displaced by Muriel Mining' in Comisión Intereclesial de Justicia y Paz, <http://justiciaypazcolombia.com/Estamos-en-desplazamiento-forzado&gt; (11.3.09).

Tomás Gisbert, researcher at the Centre Delàs for Peace Studies.