Nonviolence at work in South Sudan 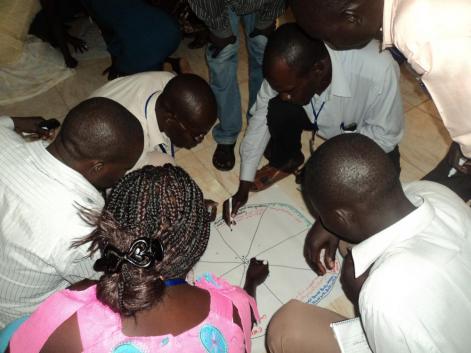 A Pastor reported (in a follow up meeting) “Since I attended the nonviolence workshop, I stopped hating Muslims. They burnt our Churches in Khartoum and since that time, I lost respect to Muslims and hate them. Now we are in a new Country, I don’t want Muslims to suffer the way Christians suffered under Islamic regime in Sudan. Its painful to forgive but my Bible tells me to forgive as God has forgiven us”. Since 2011 the pastor, a few other Christians and group of Muslims are working together. They organize outreach workshops to both Christians and Muslims in Juba.

A civilian hands-over his gun after attending nonviolence and trauma healing workshops “I killed people from the neighbouring tribe” confessed a participant after attending nonviolence and trauma healing workshop. “I am a youth leader and I led 2011 inter-communal violence that took place between Counties of Yirol West and Mvolo. My own brother was killed in that conflict. I was later arrested and put into jail. While in Prison, I suffered psychologically as I knew I will eventually be hanged by neck to death. Fortunately, I was granted amnesty on the eve of independence in July 2011”. He added “Although I was discharged, I still did not feel free as the memories of the past keep coming in my mind. The trauma healing workshop organized by ONAD was my space for healing. I stopped blaming myself and decided to handover my gun to the local authorities and joined peace teams. I want to live the rest of my life as a peace worker and I don’t need gun to protect my cattle.”

People often view nonviolence with mixed feelings! At first, normally on a few people appreciated it's importance. Others question whether or not it will work in our highly militarized and violent context. Others feel it can work in a less violent society but not in South Sudan. One of the participants in our recent workshop commented that we have been living in violence since the creation, and after all independence of South Sudan was a result of two civil wars within the Khartoum regime (referring to the 1955-1972 and 1983-2005 civil wars in Sudan). He asked: how do you face brutality and gun points with flowers? 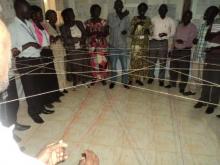 Our participants often express the difficulties involved in following principles of nonviolence, because - it's true - what happens around us is mostly violent. But there are also positive changes of attitude taking place in South Sudan - and that’s the little we are building on. We refer to practical experiences of nonviolence locally and globally. We always say that nonviolence is like a seed that needs time to germinate and grow to become a big tree. It starts with me, not with others. Personal transformation is key to nonviolence. During workshops, people often express the idea that 'If I become nonviolent, others can learn from me'.

When we meet with the same group after a couple of months break for follow up, we ask them how nonviolence has worked for them. Many people give examples of practical life experiences with nonviolence. For example, Emmanuel Ladu was able to reconcile with the person who killed his father. He said “It took me six years to forgive and get reconciled with a person who killed my father. I was a victim and so I took the initiative myself. The nonviolence workshop gave me the courage to face the enemy and let go the past pain. After I forgave him, I too felt relieved. Forgiveness sets us free of hate! I too have suffered because of not forgiving!”

In summary, the follow up meetings are always inspiring to us, and we hear our participants share their stories. On 2nd October 2013, ONAD and its volunteers celebrated the international day of nonviolence. It was the birthday of Mahatma Gandhi, leader of the Indian independence movement who devoted his life to the cause of nonviolence. We honoured him and thousands of other who worked in the same spirit. While we strive in their way, we believe victory is certain no matter how long time it will take. Forward we move, back ward NEVER.