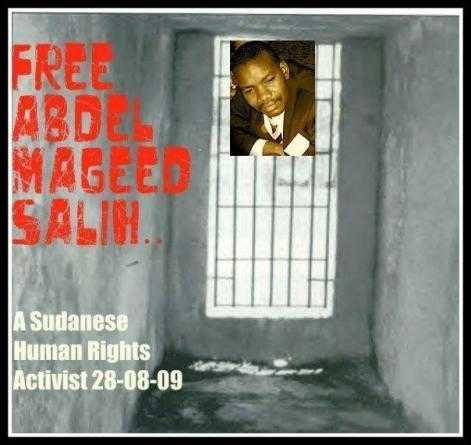 On 28 August 2009 security forces of the Government of Sudan in Khartoum have kidnapped Darfuri Activist Abdelmageed Salih Abbakar Haroun. Salih's kidnapping occurred after being monitored via mobile phone after unknown calls suspected to be from the security apparatus. Also a colleague of Salih was kidnapped with him. Both of them were led to an unknown location and no one knows why they were kidnapped in the first place.

Abdelmageed Salih is originally from the city of AlGuneina in West Darfur. He is 28 years old. Salih is a graduate of the University of Juba. He is one of the most dynamic Darfuri youth activists in Khartoum. Salih is a member of the political council and deputy officer for foreign relations of the United Democratic Liberal Party. Salih is also the co-founder of the Democratic Darfur Forum. He is the President of the Youth for Peace Society. Salih is also a co-founder of the Sudanese Coalition Anti-Poverty. Salih is also the representative of Youth Tasks in the Arab Region for the International Call for Anti- Poverty. Salih is an active trainer of nonviolence and conflict transformation and tried to bring the idea of nonviolence and peace to the Darfurian people in the war-torn region.

Salih at the moment of his kidnapping was on his way to meet with rape victims from Darfur to follow up on their cases. The girls were raped in 2008. Sudan Human Rights Activists' Forum (SHRAF), while condemning this act of kidnapping, is at the same time very concerned about the well-being of AbdelMageed Salih and his colleague. The security apparatus is notorious for torturing and ill treatment of Darfuri detainees, as occurred before in the aftermath of the events of 10 May of last year.

The Sudan Human Rights Activists' Forum (SHRAF) demands the disclosure of the whereabouts of AbdelMageed Salih and his colleague and calls for their immediate release. SHRAF also calls for accountability of those who stand behind such unconstitutional acts which are in violation to all international laws and treaties that forbid forceful disappearance and detention without notifying the relatives of the detainees or without any charges