The Canadian Forces (CF) are an all-volunteer, professional force. The Canadian Constitution does not expressly address the issue of conscription. At present there are no national laws that entitle the government to launch a conscription or compulsory military service scheme. Nor is there any system of national registration for a potential draft. [3]

Enlistment in the armed forces is voluntary for men and women. The minimum age for enlistment is 17. Sixteen-year-olds may enlist either as officer cadets in the reserve Force or as apprentices in the Regular Force. If they are under 18 they must have the written consent of parent or guardian. [6]

There is no national legislation on conscientious objection. [3] [4]

According to the government, professional serving members of the Canadian Forces, who would not otherwise be entitled to release on request may apply for release as conscientious objectors if they become firm, sincere objectors to war in general or to the bearing and use of arms as a military service requirement. The conscientious objection must be based on religious or moral study and belief and must be general. Objection to participation in or the use of arms in a particular conflict does not qualify an individual to be recognised as a CO. Similarly, a politically motivated objection is not accepted. [3]

To obtain recognition as a CO a professional serving CF-member must submit an application to the commanding officer, who considers it and weighs up whether it is valid. The findings are then sent to a career review board which decides on the application. [3]

The CF is at present busy drafting a policy on conscientious objection. [3]

On 11 February 1991 a CO (an Acting Sub Lieutenant in the Navy) was honourably discharged from the CF. He had requested discharge in August 1990, but had merely been transferred to a non-combat position ashore. His superior officers had told him "he was free to believe what he wanted, but would have to complete his four years of Obligatory Service, and that anybody under any other type of CF contract would have been released if they made a similar request on similar grounds". He resumed release proceedings in November 1990 and this time was successful. [2]

Desertion is an offence under section 88 of the National Defence Act. The maximum punishment for desertion by a soldier who is not on active service or under orders may not exceed 5 years' imprisonment. Desertion while on active service or under orders is punishable by from two years' to life imprisonment, if the soldier concerned is tried by a general court martial. If the soldier is tried by a standing or disciplinary court martial the maximum punishment is less than two years' imprisonment. [3]

During both the First and Second World War Canada employed a system of mandatory registration and compulsory military service that applied only during these wars. In the First World War there were limited provisions for religious COs. In the Second World War provision was made for COs to perform substitute service, but there were much local variations over the granting of CO status. Jehovah's Witnesses were on the whole not recognised as COs. During the war approximately 10,000 COs were acknowledged and some 400 imprisoned. Since the Second World War there has not been conscription in Canada. [1] [3] 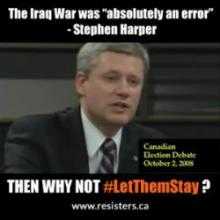 The Canadaian War Resisters' Support Campaign held a week of action from January 12 to 19th, asking Canadians across the country to send a message that U.S. war resisters are welcome in Canada, and that the Canadian government must stop the deportations and enact a provision to let them stay.

For 'Let Them Stay Week 2014', activists joined in on social media, by writing to local papers, lobbying the Minister of Citizenship and Immigration and promoting public meetings and debates.

Turkey continues to dominate this issue of co-update, after we already opened the last issue with a long report on Turkey. However, the good news from the last issue cannot be repeated. This time we have to report that torture and abuse of a conscientious objector in a Turkish military prison does not necessarily lead to prosecution - or if it does, then to the prosecution of the victim.

In recent weeks several US war resisters who have sought refuse in Canada have been ordered to leave the country. U.S. Iraq war resister Jeremy Hinzman was told on 16 August that his family's application to stay in Canada has been rejected. Hinzman was told that he does not qualify under Canada's Pre-Removal Risk Assessment (PRRA) program following a review by a Citizenship and Immigration department officer.

With the number of Canadian soldiers going AWOL increasing, and the Canadian military playing an increasingly aggressive role in Afghanistan and Haiti, the Canadian military too seems to have problems recruiting new soldiers. According to the "London Free Press", "[t]he number of Canadian soldiers who have gone absent without leave has doubled in the last six years... Records obtained through access to information show 708 troops were convicted of going AWOL in 2005 - more than twice the 340 convicted of the offence in 2000.