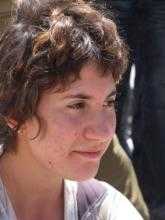 War Resisters' International learned today that Israeli woman conscientious objector Raz Bar-David Varon was sentenced to a third term in prison on Sunday, 21 December 2008. This time she received a sentence of 21 days. She is due out on 9 January 2009.

Raz Bar-David Varon first went to prison for refusing to enlist on 3 November 2008. Her second prison term was from 1 to 21 December 2008.

War Resisters' International calls for letters of protest to the Israeli authorities, and Israeli embassies abroad. An email letter to Israels Minister of Defence Ehud Barak can be sent at /node/6280.