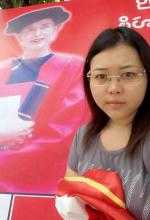 Chaw Sandi Tun from Myanmar has been sentenced to six months’ imprisonment in connection with a Facebook post mocking the army.

She is a prisoner of conscience, who must be released immediately and unconditionally.

Send a protest email to the Myanmar authorities here.

The Myanmar authorities continue to arrest and imprison activists and human rights defenders simply for peacefully exercising their right to freedom of expression which is enshrined in Article 19 of the Universal Declaration of Human Rights (UDHR).

On 28 December 2015, Chaw Sandi Tun, also known as Chit Tha Mee, was sentenced to six months’ imprisonment by the Maubin Township Court, in Ayeyarwady Region, in the southern part of the country.

Article 66(d) of Myanmar’s 2013 Telecommunications Act, which provides for up to three years’ imprisonment for “extorting, coercing, restraining wrongfully, defaming, disturbing, causing undue influence or threatening any person by using any Telecommunications Network”.

She was arrested in Yangon, Myanmar’s main city, and transferred to Maubin prison in Ayeyarwady Region, where she remains behind bars.

Also please write to the President and Minister of Home Affairs directly via mailing your letters:

Copies to be sent:

Also send copies to diplomatic representatives accredited to your country via email.