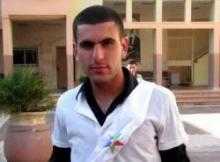 War Resisters' International learnt today that Israeli conscientious objector Ajuad Zidan has been sentenced to a sixth (!) prison term, this time of 30 days, on 27 February 2011.

Since November 2010, when he first sentenced 10 days' imprisonment for refusal to enlist, he has been in and out of prison.

Ajuad Zidan, 18, from the town of Beit Jann, a Palestinian member of the Druze religious community. Members of the Druze community, unlike most other Palestinian citizens of Israel, are conscripted into the Israeli army. Explaining his refusal to enlist Ajuad Zidan stated to the press that “the loneliness of the prison cell is one thousand times better than standing in front of my people while pointing a gun at them, or imposing a curfew on them”. On top of that, Ajuad Zidan has also stated his refusal to carry weapons or be part of any military force in general.

Ajuad Zidan is due to be released from prison on 25 March, and is likely to be imprisoned again afterwards.

War Resisters' International calls of letter of support to Ajuad Zidan.
Ajuad Zidan
Military ID 5810026
Military Prison No. 6
Military Postal Code 01860, IDF
Israel
Fax: +972-4-9540580
Since the prison authorities often block mail from reaching imprisoned objectors, we also recommend you to send your letters of support and encouragement via e-mail to: messages2prison@newprofile.org. They will be printed out and delivered during visits.

War Resisters' International calls for letters of protest to the Israeli authorities, and Israeli embassies abroad. An email letter to Israels Minister of Defence Ehud Barak can be sent at http://wri-irg.org/node/12317.