Campaigning for Alternative Service in Russia 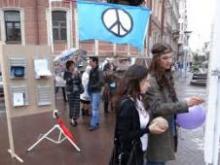 Alena Karaliova is a human rights lawyer.  In 2012, she started working on the protection of the rights of conscripts, both those doing military service and those doing alternative civilian service.  Her main spheres of activity are in providing legal and assistance; carrying out legal and comparative analysis of regulatory legal acts relating to conscription, military service and alternative service; and interacting with international human rights organisations.  Writing here, she gives us an overview of the campaign for alternative service in Russia.

In Russia: men from the age of 18 to 27 are subject to conscription if they are considered to be in ‘good health’.  This lasts for one year, with only one day off per week and no vacation.  Usually, only a third of all men of conscription age are actually conscripted (a third cannot serve due to bad health and a third are not conscripted at all because there is no need).

It is our view that it would be much harder to campaign for total objection than alternative civilian service in Russia.  Currently, even alternative civilian service is often considered by military officials and the public to be a threat to national security.  Total objection would be interpreted as an even greater threat, and there would be very high level of resistance from military command and the public alike.

In our campaigning for alternative civilian service, we place a big emphasis on the public benefit and utility of that service.  This is also consistent with our organisation’s broader aim to assist in the creation of a developed civil society in Russia, which, alongside a democratic state and the proper rule of law, we hope would make a return to totalitarianism impossible.  However, for this aim to be truly realised, people of all genders, and not just men, would of course need to participate.  Focusing only on those who are conscripted may therefore be a limitation of our model, although it is a model which women are active participants in promoting.

The biggest obstacle facing our organisation and partners in the way of we campaigns for conscientious objection is the negative public image of alternative civilian service in Russia.  There are a lot of myths concerning it, for example that it is not for ‘real men’, or that it exists only for representatives of ‘marginal’ religious groups.  In conducting our project we hold educational and awareness raising campaigns to overcome such attitudes.  However, our efforts are dwarfed by the militarism of Russian society, which has become increasingly evident over recent years.  This is a new challenge to us, but one that is connected with the old challenge of changing ideas about what makes a real man: militarism, after all, is an expression of that model of masculinity in which dominance and the capacity to wreak violence are prized.

Another obstacle is the reluctance of military draft officers to provide citizens with alternative civilian service placements.  Every year, state run entities request more than 5,000 alternative servicemen to fill various jobs, but the total number of alternative civil servicemen available does not exceed 1,000 per year.  Notwithstanding this fact, we seek to address arbitrary and abusive acts by conscription or 'draft' committee officers and draft boards, such as unfounded rejections of applications, unlawful denials of requests for alternative civilian service placements, and attacks on conscientious objectors' dignity.  It is, however, possible to legally overcome this obstacle via the representation of conscientious objectors at military draft committees and by filing claims of unlawful decisions by officers.

The final obstacle is the complete lack of government policy to promote alternative civilian service and corresponding lack of state funding for such promotion. Information about alternative civilian service is not to be found at the majority of military registration and enlistment offices, and nor is it accessible for young men at schools either, because the government does not provide dedicated lessons or visual manuals.

Given our situation, then, education and awareness raising, both about the possibility of alternative civilian service and the positive reasons for undertaking it, remain our priorities in the Russian conscientious objection movement.

Go to next chapter: Alternative Service and the Danger of Depoliticisation