Thank you for supporting War Resisters' International this year.

We thought we'd take stock of some of the beautiful ways that the WRI network have been taking action this year against war and its causes, and in support of those who suffer because of militarism. 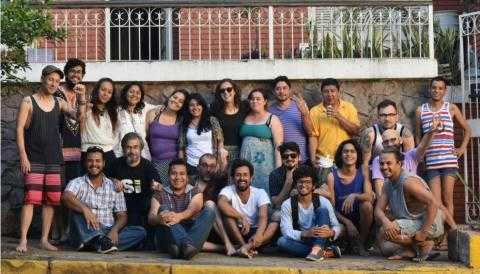 In September, our Council met and - as well as spending a few days plotting and planning future WRI work - joined in with actions against DSEI, the London arms fair. We helped delay the set up of the fair considerably (see photo for two of our members blockading and entrance road and preventing vehicles from gaining access) and get a lot of mainstream media attention. Local campaigners said that WRI's participation in the actions was 'very welcome', and that our 'creative energy was much appreciated'.

In November, RAMALC - the antimilitarist network of Latin America and the Caribbean - gathered in Paraguay, and lots of our members all over the world also took part in the fourth annual International Week of Action Against the Militarisation of Youth, which included public events, media interviews and street actions. 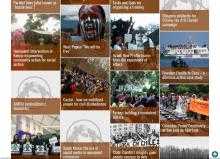 In spring we launched our new website, which includes Empowering Nonviolence - an incredible resource (it's been described as "the most beautiful antimilitarist website out there!"), which makes all WRI's resources on nonviolence accessible more easily, for free. There's content available in 14 languages so far (including the French edition of the Handbook for Nonviolent Campaigns, which was published in July).

Supporting those who refuse to kill

Our Right to Refuse to Kill programme worked with others to run a high-level meeting in Brussels in October looking at how best to support those who have fled militarisation (including indefinite military service) in Eritrea. The meeting resulted in the foundation of a network of people working together against militarism in Eritrea, and for the rights of those who have been forced to leave.

Just a few weeks ago on Prisoners for Peace day, we published the names of some of those in prison for their work for peace, and people all around the world wrote letters to those in jail. This year, we've continued to share news from conscientious objectors around the world in our CO-Update, and we've updated lots of our country reports in the World Survey of Conscription and Conscientious Objection.

We're already starting to prepare for International Conscientious Objection Day on 15th May next year - when we'll be focusing attention on the 400+ people imprisoned in South Korea for refusing military service - and on the two meetings exploring the links between gender and youth militarisation that will be help in Europe and Asia in February and March 2018. Check back at our website on youth militarisation - antimili-youth.net - for the outcomes of these meetings.

And we're already starting to plan for our next International Assembly, which will take place in Colombia in 2019.

With the challenges that we will face in the years to come, and the horrors that those of us impacted by war and repression are facing right now, we look forward to working with you for a demilitarised future. Our regular donors make our work possible - please consider making a regular donation to WRI

We wish you a happy turn of the year.