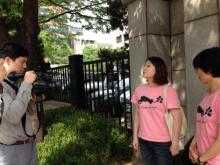 Yeo-ok Yang and Jungmin Choi, activists of World Without War, and Reverend Bora Im of Hyanglin Church were put into prison on May 20.

They were sentenced to pay a fine of two million won each (approximately 2,000 USD) for taking a direct action to block the construction of Jeju Naval Base, which had been illegally undertaken without an agreement with local residents.

Instead of paying the fine, they chose to be imprisoned in a workhouse. Two million won is a large amount money for an activist. But that is not the main reason of their choices. They thought it is a violation of the constitutional rights to the freedom of assembly and association to impose heavy fines on activists taking a thoroughly nonviolent way of resistance against wrongful state policies.

Thus, it is an active civil disobedience that these peace activist refused to pay the fine and walked into a prison on their own feet. Being punished instead of obeying an unjust law, they are actively revealing the unjustness of law. They are showing that the construction of Jeju Naval Base is wrong and that it is unjust to violate the constitutional rights to the freedom of assembly of association by imposing heavy fines.

We respect their choices to be imprisoned. But we cannot let our friends stay in the prison for too long. There are several ways you can help them:

1. Fund-raising for the fine

You can donate a thousand won just by logging in with a Facebook account and a few clicks. The contribution comes from a number of committed donators. (Refer to the attached images for instructions.)

SocialFunch is a crowdfunding site for social movements. You can donate any amount of money in several payment methods. (Only available in South Korea.)

Send your letters of support to these activists.

(1) Send an email to: peace@withoutwar.org

(2) You can also write online messages on a Facebook page:

(Sample message: Release all peace activists of Gangjeong. Nonviolent direct action is not a crime! #wearenotguilty)

(Sample message: Stop the construction of Jeju Naval Base! #wearenotguilty)

(Sample message: Stop the construction of Jeju Naval Base! #wearenotguilty)

Information on how to use the donation page: