Refuse, your nation will protect you campaign launched on the Refusing Mount in front of Atlit military prison

The campaign “Refuse, your nation will protect you” was officially launched in a demonstration in front 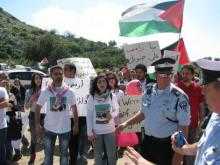 of the Atlit military prison last Friday, 21st of March 2014. The program and future action plan aiming to left the mandatory military service off the sons of the Arab Druze society was introduced.

Dozens of political activists from Jerusalem, the occupied Palestinian capital, participated declaring their support and taking part in the struggle against the mandatory military service imposed on the Arab Druze reassuring they are an integral part of their nation.

The name of the campaign was raised in the weekly protests in the villages of the occupied West Bank, Al-Nabi Saleh, Beliin, Naalin and Al-Maasara, and the protesters called for ending the mandatory military service imposed on the Arab Druze.

Mona Omary, an activist and part of the founding group, hosted the event and said: “This is the third time we climb the Refusing Mount to confront this oppressive prison. In the previous time, there were 17 brave youth refusing in it, and our loud voices scared the prison authorities and they moved them to Military prison 4. Some of those youth refused publicly, and others silently, and we called them to refuse, for their nation will protect them. They heard us, and some of them joined us and are protesting here with us today.

Maisan Hamdan, the coordinator of the campaign, spoke on behalf of it and said: “Refusing the imposed military service is one of the components of our Palestinian identity. Our campaign is not affiliated with any political party nor religion. We call all the national powers to unite and coordinate in a joint effort to end the mandatory military service imposed on the Palestinian Arab Druze youth." Maisan challenged the occupation authorities to face the Palestinian youth when it is united and standing firm against its atrocities. She applauded the role of this youth in defying the Praver Plan in the Naqab, a struggle that still continues. Maisan added that this campaign was born to present alternatives for the refusing youth, stressing that the policies of intimidation towards the Arab Druze youth trying to scare them of a dark future if they refuse would not pass anymore, and the privileges promised for those who draft has proven to be lies. The campaign, in partnership with many national organizations, will provide academic scholarships to the refusing youth who wish to complete academic studies. Moreover, the website of the campaign, www.irefuse.info was also launched as well as The Petition reviving past petitions done in the past and a support phone line for acquiring the legal and moral support provided by the campaign.

Raafat Harb, a brave Arab Druze spoke of his personal experience in refusing and emphasized the importance of the right of choosing to refuse among the Arab Druze youth.

‘Refuse, your nation will protect you’ is determined to take 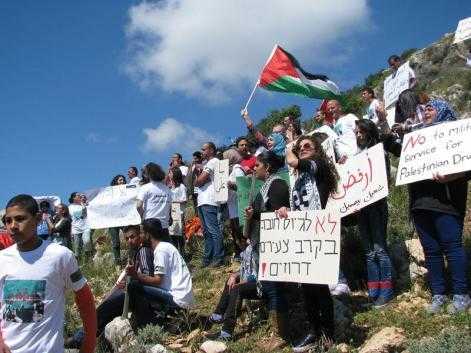 exceptional steps, and has taken many already before launching the campaign, which, included an extensive research of the current situation. It is also important to mention that for the first time, the weekly protests that happen in the west bank have endorsed the call of the campaign. Moreover, the Palestinian Jerusalemite youth, who face nowadays the national service campaign against them, came to protest in front of the Atlit military prison on the Refusing Mount and called to end the mandatory military service. This campaign made sure to present alternatives for the youth and not only show an attitude towards refusing.


Last, in is important to point out that this group includes not only Druze youth, it rather includes youth from the various factions of the Palestinian nation, West Bank, Jerusalem and 1948 areas, all with the goal of bridging the gaps between them resulted by the occupation resulting in a joint national action. This is an unprecedented step and a significant turn in the struggle against the imposed mandatory military service.