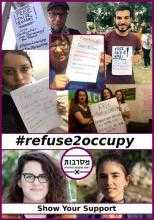 Refusers Omri Baranes and Tair Kaminer have been imprisoned again in Israel.

Omri Baranes, an 18 year old pacifist, was sentenced to 30 days imprisonment again for refusing to serve in the IDF. Omri, who has already spent 37 days behind bars, is now spending 30 more in military prison. Omri appealed to the military committee of exemptions in September 2015 and requested to be exempted from serving in the military on conscientious grounds.

Tair Kaminer, who has already spent more than 100 days in military jail, was also put on trial and imprisoned again. Tair is now serving her sixth prison term and is going to spend 45 more days behind bars. In her declaration in January this year, Tair wrote 'When I look at all these children, at the next generation of both sides and the reality in which they live, I can but see the continuation of trauma and pain. And I say: Enough!'

In her declaration Omri Baranes wrote:

“The military creates a circle of violence while claiming to defend the country. Politicians and public leaders are responsible for the creation of this criminal institution, and our country is militaristic as a result; military service is mandatory, and the army is considered an integral part of Israeli life.

The education system indoctrinates us, telling us that the military is crucial for our existence, and most of our tax money ends up going there. I believe that a person has a responsibility towards certain humanistic values, which lie beyond his/hers political and social framework, which is why I refuse to enlist."

As well as filling in our email alert you can also join a social media campaign initiated by friends of Tair and Omri. To join the campaign take a picture of yourself holding a sign of support, with your name and where you are from, and post it with the hashtag #refuse2occupy.

You can also send emails of support to Omri and Tair. Write to mesarvot.im@gmail.com, and messages will be passed on.