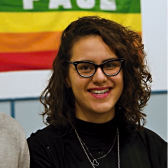 Tair Kaminer, 19 year-old CO from Israel, has been imprisoned for refusing to serve in the army again. This is Tair's third imprisonment for her conscientious objection to military service.

With this final tribunal decision, Tair, who has already spent 45 days behind bars in two seperate terms since January, will spend 30 more days in military prison.

In her declaration, Tair writes 'When I look at all these children, at the next generation of both sides and the reality in which they live, I can but see the continuation of trauma and pain. And I say: Enough!'

In a decision from January 2007, the United Nations Human Rights Committee recognised the right to conscientious objection as a legitimate exercise of the right to freedom of thought, conscience, and religion, as guaranteed by Article 18 ICCPR. Repeated imprisonment is a violation of international legal standards. The UN Working Group on Arbitrary Detention in Opinion 24/2003 on Israel came to the conclusion that the repeated imprisonment of conscientious objectors in Israel is arbitrary, and therefore it constitutes a violation of 14 par 7 of the ICCPR, of which Israel is a signatory.

As well as filling in our email alert, you can also sign this petition by Refuser Solidarity Network, which calls on Israeli Prime Minister Netanyahu to free Tair.

If you'd like to send your support emails to Tair, write to mesarvot.im@gmail.com, and messages will be passed on.