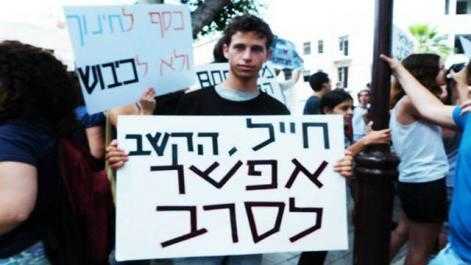 On 30th October Udi Segal, a conscientious objector from Kibbutz Tuval in Israel, was imprisoned for 10 days for refusing military service. This is Udi's fifth imprisonment.

Update: Udi began a hunger strike on his entry into prison, but has now ended it was a result of abuse from prison guards, who put him in isolation and threatened him with further charges.

Udi said 'Because of my repeated imprisonment, the continuing deprivation of my freedom, I decided to start a hunger strike, until I am released from the army. I refused because serving in the army contributes to an oppressive system, to which the army is an executive arm. I will not take part in the denial of the liberties of Palestinians. I will not contribute to a situation in which four million Palestinians live in territories under a regime they did not elect, a regime which is oppressing me too.'

See the whole statement in this video.

Udi is one of the 130 conscientious objectors who declared their refusal in a letter to the Israeli Prime Minister.

Udi Segal claims his human right to conscientious objection, as guaranteed by Article 18 of the ICCPR. In a decision from January 2007, the United Nations Human Rights Committee recognised the right to conscientious objection as a legitimate exercise of the right to freedom of thought, conscience, and religion, as guaranteed by Article 18 ICCPR. Repeated imprisonment is a violation of international legal standards. The UN Working Group on Arbitrary Detention in Opinion 24/2003 on Israel came to the conclusion that the repeated imprisonment of conscientious objectors in Israel is arbitrary, and therefore it constitutes a violation of 14 par 7 of the International Covenant on Civil and Political Rights, of which Israel is a signatory.

This has recently been asserted again by the United Nations' Human Rights Committee, whose 28th October Concluding Observations on the state of Israel reiterated their concern that those whose conscientious objection applications are rejected may be repeatedly imprisoned for their refusal to serve in the armed forces. They called upon Israel to refrain from repeated imprisonment for refusal to serve in the armed forces, which constitutes a violation of the principle of ne bis in idem.

Send a letter of support via e-mail to Udi through New Profile, at messages2prison@newprofile.org.

A list of Israel's embassies abroad can be found here - please send them a copy of your protest email.