COLOMBIA: Constitutional court recognises Jhonatan as a CO - keep up the pressure for his release 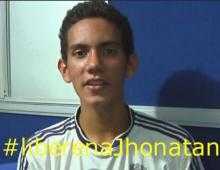 Last week we issued a CO Alert for Jhonatan David Vargas Becerra, who was arrested for 'desertion' by the police on 4 September in the city of Barrancabermeja, Santander.

Whilst he is still being detained, yesterday the Colombian constitutional court ruled on his case, agreeing that Jhonatan David Vargas Becerra's fundamental rights to freedom of conscience, freedom of worship and freedom of religion have been violated, and recognising Jhonatan as a conscientious objector.

Jhonatan's supporters, through Justpaz, ask that we keep up the pressure to ensure this happens.

Please send a email to encourage Jhonatan's swift release here. The English translation of the email is here.

Jhonatan was forcibly recruited by the army against his will in March 2013. He has always stated that his religious beliefs prevented him from exercising violence or belonging to armed groups, and he therefore refused to perform compulsory military service. On 14 June 2013 Jhonatan received permission to travel to his homes for leave. He decided not to return to the battalion, as the only alternative to ensure his right to conscientious objection.

For over a year Jhonatan has been undertaking legal actions, seeking to ensure his right to conscientious objection. His case has been selected by the Constitutional Court for review. Despite this, on 29 August 2014 military authorities informed Jhonatan that he was considered a deserter, and begun a military criminal proceeding against him.

On 4 September, 2014, at 8:30 pm, on leaving the Industrial University of Santander, Jhonatan was approached by police at a checkpoint where his identification documents were requested. On examining his identity card, the arrest warrant was flagged, so they detained him and took him to the police station. The next day he was transferred to the Battalion Nueva Granada.

On 16 September the Colombian constitutional court ruled on his case, agreeing that Jhonatan David Vargas Becerra's fundamental rights to freedom of conscious, freedom of worship and freedom of, religion have been violated, and recognising Jhonatan as a conscientious objector.

As well as using our protest email, please consider cutting and pasting the email and from your own email account sending it to: ddhhydih@ejercito.mil.co (the army's Head of Human Rights) , fiscalia22pm@ejercito.mil.co (military prosecutor); fuerzasmilitares@procuraduria.gov.co,(the Battalion in Nueva Granada); magdalena@defensoria.gov.co, (the Defensoria - a public protector) and justapaz@justapaz.org (Justapaz, Jhonatan's support group in Colombia).

Please tell others about Jhonatan's situation on social media, using #liberaJhonatan in Spanish, or #freejhonatan in English.