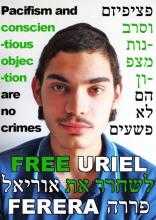 On 8th June Uriel Ferera, a 19 year old conscientious objector in Israel, was imprisoned for 20 days for refusing military service. This is his third imprisonment.

'We will not take part in occupation'

Uriel is one of the signatories to the letter 50 Israelis of draft age have sent to Prime Minister Netanyahu, stating that they will refuse to join the IDF due to the occupation of the West Bank, and the violent effect it has on Israeli society.

An interview with Uriel in +972 Magazine can be found here, and watch a video of Uriel speaking about his refusal here.

Uriel Ferera claims his human right to conscientious objection, as guaranteed by Article 18 of the ICCPR. In a decision from January 2007, the United Nations Human Rights Committee recognised the right to conscientious objection as a legitimate exercise of the right to freedom of thought, conscience, and religion, as guaranteed by Article 18 ICCPR.

During the last days of his first prison term, Uriel was denied phone calls including calls to his lawyer from New Profile, and was not allowed to receive letters of support. However, it is still important to send them.

We also recommend you to send them your letters of support and encouragement via e-mail to Uriel through New Profile, at messages2prison@newprofile.org.