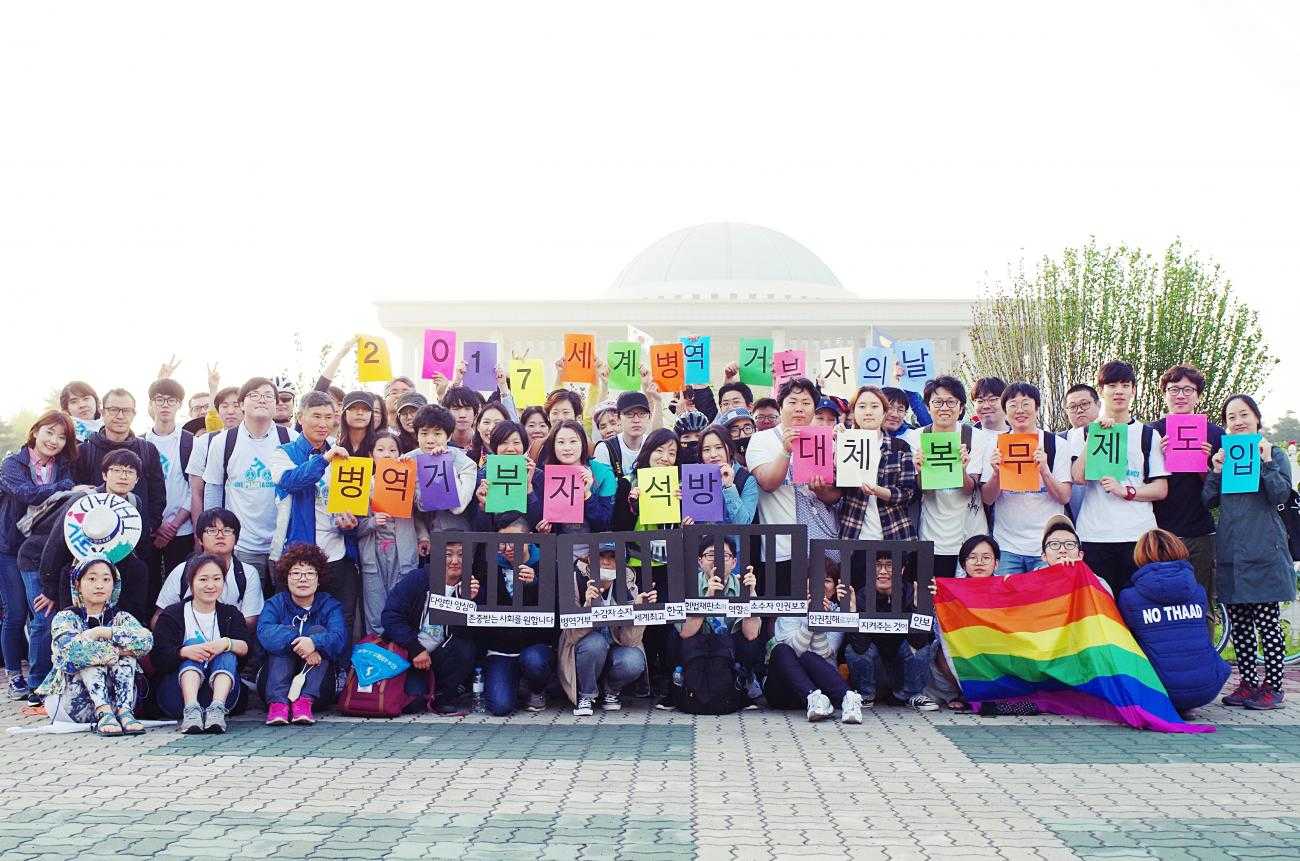 Every year on 15th May we celebrate International Conscientious Objection Day.

This year we're focusing on South Korea, the country that imprisons more conscientious objectors than the rest of the world put together. Right now there's over 250 young people in jail, with 18 months sentences. But there's good news. Currently, there's no substitute service in South Korea, so if you don't want to go to the army, you go to jail. But the current President pledged to change this in his election manifesto, and the National Human Rights Commission of Korea has voted repeatedly to recommend that the South Korean government institute an alternative service system. See our recent news story: wri-irg.org/en/story/2017/south-korea-growing-hopes-conscientious-objectors

On 15th May we'll be asking the South Korean government to take the next step, finally recognise the rights of conscientious objectors, and stop sending them to prison.

World Without War, WRI's member group in South Korea, have made a statement today. Please share:

How to take action

12th May: cycle parade with World Without War. Info here.

15th May: launch of the Korea version of Conscientious Objection: A Practical Companion for Movements.

19th of May: Movie screenings organised by Movement of Conscientious Objectors (Russia) in St. Petersburg and Voronezh followed by signing petitions, #freeKoreanCOs, to be delivered to the Embassy of the Republic of Korea in Russia.

15 May 2018: 6.30-8.00pm Bradford Peace Museum host 'Oh, What a Lovely War Resistance!', a lecture by hisotrian Clive Barrett on music in opposition to war. Info here.

Tuesday 15 May 2018, 6.30pm Watch the film Hacksaw Ridge at the Quaker Meeting House, Ship Street, Brighton. There will be a brief introduction followed by the showing of the film, about a an army medic in World War Two who refused to carry a weapon or kill anyone. Organised by the Brighton and Hove branch of the Women's International League for Peace and Freedom. Info here.

15th May: collecting signatures for imprisoned South Korean COs. Meet between 12pm to 2pm in the Market Square. Info: cambridgestopwar@gmail.com

15 May, 10.00am: Join a guided walk and morning of quiet reflection to follow the route of the conscientious objectors who built the "road to nowhere", otherwise known as "Conchies' Road" while imprisoned in the Princetown camp.

Tuesday 15 May: 5.30-8.00pm. Visit Liverpool Friends' Meeting House (School Lane, Liverpool L1 3BT) for a screening of the film People Who Don't Take Up Arms, a documentary about the hundreds of conscientious objectors imprisoned in South Korea. Organised by the Merseyside Peace Alliance. Info here.

15h May: meet at 12 noon at Tavistock Square for this annual celebration of conscientious objectors. More info

Saturday 5 May to Sunday 23 September 2018 (generally open 1.00-5.00pm, Wednesday to Sunday):
A new sculpture by Al Johnson will be at Bruce Castle Museum, Lordship Lane, London N17 8NU. The Lost Files explores the experience of conscientious objectors in World War One, with a focus on 350 conscientious objectors and their families from Hornsey, Tottenham and Wood Green. Info here.

Tuesday 15 May: 12.00noon to 1.00pm. Norwich Quakers are holding a vigil on Hay Hill to commemorate conscientious objectors. All are welcome. For more information email Paul Davies at daviespaul1@yahoo.co.uk.