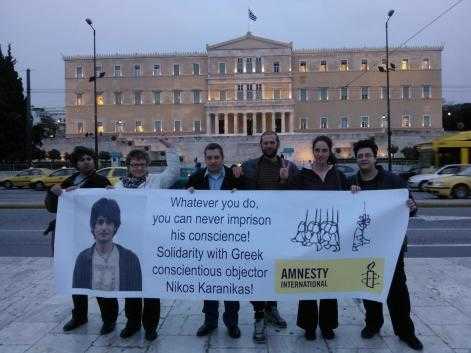 Amnesty International, the European Bureau for Conscientious Objection and War Resisters’ International condemn the new prosecution of 44-year-old Nikolaos Karanikas, conscientious objector on ideological grounds. Three years after their previous joint public statement, the three international organisations are asking again that the greek authorities comply with the European and international standards and recommendations, and to end immediately all the prosecutions, prison sentences, administrative fines (of 6,000 Euros) and discriminations against conscientious objectors, whatever their motivation.

Nikolaos Karanikas is being tried under the charge of draft evasion (“insubordination”), by the Military Court of Thessaloniki, on Friday, 8 March 2013. Eirini Tsolaki, Vice-President of the greek section of Amnesty International and Lazaros Petromelidis, Representative of War Resisters’ International, will attend the trial as observers, while Friedhelm Schneider, President of the European Bureau for Conscientious Objection and Ioannis Glarnetatzis, President of the Association of Greek Conscientious Objectors, will testify as defence witnesses. Before the trial, activists of the three organisations will participate in protest actions in Athens and Thessaloniki.

"When will the greek authorities stop persecuting those whose conscience renders them unable to join the military? When will they stop trying people repeatedly for the same act? When will they stop trying civilians in military courts?", said the Vice-President of the greek section of Amnesty International, Eirini Tsolaki. "Greece is going backwards in the protection of human rights. We strongly condemn the greek practice of criminalising conscientious objectors", stressed the President of the European Bureau for Conscientious Objection, Friedhelm Schneider. "We demand that the greek government urgently brings their legislation on conscientious objection in line with the european and international standards and recommendations", said the representative of War Resisters’ International, Hannah Brock.

Nikolaos Karanikas was arrested on the morning of Wednesday, 20 February 2013, and was brought to the police station of Touba, charged with insubordination. Under the procedure for a “recent crime”, he was brought in front of the military prosecutor of Thessaloniki. Following a request for postponement, his trial was set for Friday, 22 February 2013 at the Military Court of Thessaloniki and he was released. On 22 February 2013, following a new request for postponement, the trial was postponed for Friday, 8 March 2013. According to Nikolaos Karanikas’ lawyer, Thomas Haralampidis, the procedure which was followed during the arrest is not the usual one, since it’s rare that the procedure for a “recent crime” is followed. Meanwhile, on 22 February 2013, a new draft call was issued, by which Nikolaos Karanikas is called up for military service on 20 March 2013. This fact, as long as Nikolaos Karanikas insists in his refusal to join the army on grounds of conscience, will most probably lead to a new prosecution for insubordination.

Furthermore, in any case, conscientious objector Nikolaos Karanikas, like any other civilian, should not have been tried by a military court. This was explicitly ruled by the European Court of Human Rights: it represents a violation of the right to a fair trial (Article 6 of the European Convention on Human Rights) when conscientious objectors are tried by military courts (case of Ercep v. Turkey, judgement 22/11/2011).

Despite the fact that the European Court of Human Rights has explicitly recognised that the right to conscientious objection to military service is protected by the Article 9 of the European Convention on Human Rights, on freedom of thought, conscience and religion (case of Bayatyan v. Armenia, decision 01/06/2011), Greece continues not to comply with its international obligations and to violate the rights of conscientious objectors.

Nikolaos Karanikas declared his objection to military service on grounds of conscience in the ’90s, before the right to conscientious objection was recognised in Greece. In August 1995 he was arrested and transferred to the military prisons of Thessaloniki. In October of the same year, he was convicted for insubordination in a period of general military mobilisation, and was sentenced to 4-years imprisonment by the Military Court of Thessaloniki. In December 1995 the Military Appeal Court of Thessaloniki reduced his sentence to 1 year in prison suspended for 3 years. Upon his release from the military prison, he was handed a new conscription note. Nikolaos Karanikas, as a conscientious objector, refused to enlist and this time he was charged with desertion (in January 1996). In December 1997 he was arrested again and he was released after he was handed a new conscription note. He refused to enlist again and he was charged again with desertion. In October 2000, while the law on conscientious objection and alternative service was voted since 1997, the Military Court of Thessaloniki acquitted Nikolaos Karanikas from the charge of desertion. 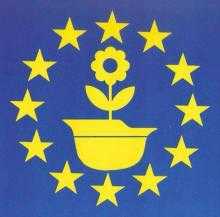