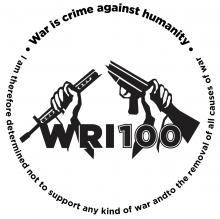 The War Resisters' International network was formed in 1921 at a meeting of pacifists, who gathered in a town called Bilthoven, in the Netherlands, from 23rd to 25th March. The original founders were conscientious objectors and war refusers from Britain, the Netherlands, Germany and Austria, and together they agreed to begin forming a network they originally named "Paco" (which means "Peace" in Esperanto). They formulated a statement which read:

War is a crime against humanity. We therefore are determined not to support any kind of war and to strive for the removal of all causes of war.

Our network has remained committed to that statement since our founding. Since that meeting our network has grown and changed to include pacifist and antimilitarist organisations all over the world.

Throughout 2021 we are holding a number of events to mark the centennial and begin to ask what the coming years hold for our network.

One of the many elements that has allowed us to sustain our resistance is the support of people around the world giving regular, small donations - we rely on this support and couldn't function without it.

To highlight our founding date, we're encouraging WRI supporters to share Broken Rifle's across social media. There are already lots of versions and designs of the Broken Rifle - logos, banners, badges, posters etc - and there's lots of opportunity to make new ones as well. We'd love to see individuals and affiliates share beautiful, creative versions of the Broken Rifle on their social media profiles, using the hashtag #WRI100 and tagging the WRI profiles

Roberta Bacic - a previous WRI staff member who now works on the Conflict Textiles project - has curated, with with assistance from Breege Doherty, online exhibition of arpilleras that will be hosted on the WRI website. Arpilleras (pronounced ‘ar-pee-air-ahs’) are appliquéd tapestries that originated in Chile and have since been used by women across the world to explore themes of war, conflict, nonviolence, and protest  - those of us who attended WRI's 2014 gathering in Cape Town for the SMALL Actions BIG Movements: the Continuum of Nonviolence conference will remember the exhibition there!