The German military has two fundamental problems. The first problem is related to personnel: in 2009, the German Bundeswehr should have recruited 23,700 new soldiers [1]. But with 21,784 new recruits, the target was not reached — in the previous years the target usually was reached. In 2009, 14,000 open positions could be filled with external applicants, and almost 7,800 soldiers could be won through recruitment within the military — for example from the pool of serving conscripts. With the suspension of conscription in Germany from summer 2011, the German Bunderwehr will need to recruit completely from the civilian public.

The second problem is related to the acceptance of military operations abroad within the German population: an opinion poll of the renowned polling institute Allensbach on behalf of the conservative newspaper Frankfurter Allgemeinen Zeitung from May 2010 concludes not only a massive rejection of the Afghanistan deployment of the Bundeswehr with 65% of those polled, but also in general opposition within the German population to military operations abroad of the Bundeswehr.[2] 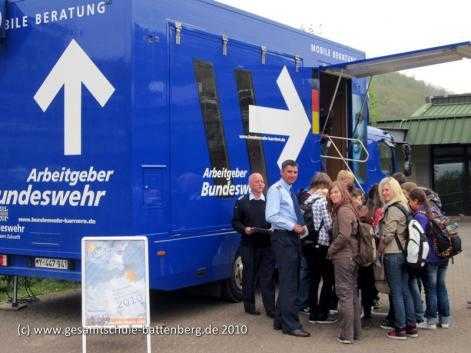 Youth officers, young men and women with several years of military experience, form the spearhead of the military when it comes to influencing young people in schools. Already in 1958 – only three years after the foundation of the Bundeswehr – this unit was formed, and already back then the task was to convince the public of the purpose of the German military. Today there are about 94 full-time and 300 additional, extra-official youth officers in Germany, who are trained at the Akademie der Bundeswehr für Information und Kommunikation (Academy of the Bundeswehr for Information and Communication – AIK or AkBwInfoKom; formerly: Amt für psychologische Kriegsführung) in Strausberg near Berlin. In 2009, the youth officers did 7,245 events with 182,522 participants – among those were at least 160,000 pupils [3]. Often the youth officers, who appear very young and “cool”, talk in class rooms about topics such as “soldiers as citizens in uniform” or “Bundeswehr deployment abroad”, discuss the Afghanistan deployment of the German military, or play the simulation game “Politics & International Security” (in short POL&IS), which lasts several days, with young people. This simulation game is very attractive with teachers and in 2009 alone there were more than 365 simulations with about 16,120 pupils and their teachers as well as students and trainee teachers.[4] Through this, pupils should learn that the military is a normal means of politics, and that military interventions are often unavoidable. In discussion youth officers often stress that they are not recruiters – they would only provide information on security policy and the Bundeswehr. This is questionable, because for young people it is a first step to the profession of soldiering if you are persuaded of the purpose of the army and its deployments. But often the Bundeswehr is also directly present in schools through military service advisers: at about 12,600 events military service advisers reached more than 280,000 pupils in 2009.[5]

Since 2008 eight of the 16 German states signed co-operation agreements between the respective ministry of education and the German Bundeswehr (North Rhine-Westphalia, October 2008; Saarland, March 2009; Baden-Württemberg, December 2009; Rhineland-Palatinate, February 2010; Bavaria, June 2010; Mecklenburg-Vorpommern, July 2010; Hesse, November 2010; Saxony, December 2010). Youth officers should “in the context of schools inform pupils about the instruments of politics possible and/or necessary to secure peace“, these agreements say.[6] It is known that the government and the Bundeswehr view even military interventions – in the case of the war on Yugoslavia even on the brink of being outside of international law – as an instrument necessary for politics. “In this”, continue the co-operation agreements, “information on global conflict prevention and crisis management will need to be included as well as on national interests.” The national interest of Germany includes, according to the present strategic concept of the Bundeswehr, also the safeguarding of resources for the Germany economy by military means.

The Bundeswehr and the Ministry of Defence also produce educational materials. Officially, these materials for pupils and teachers with the title “Peace & Security” are produced by the “Arbeitsgemeinschaft Jugend & Bildung e.V.“ (Working Group Youth & Education). When you look at this working group more closely, it becomes apparent that it is a neoliberal think tank owned partly by the neoliberal German government coalition partner FDP (Liberals). The glossy brochures are not produced badly from a pedagogical perspective: the texts are not simple pleas for military missions world-wide, but should primarily show that the Bundeswehr provides humanitarian aid – war is not visible. The exercises in the present 32-pages booklet for pupils 2009/2010 steer the thoughts of the pupils in one direction: there do not seem to be alternatives to military interventions. In 2007, schools ordered more than 325,000 copies of the booklets for pupils, and more than 16,000 of those for teachers for use in the classroom.[7] The German government provides the finance for these materials: in 2008/2009 the government spent 330,000 Euros for the production of a new pupil and teacher booklet on “Peace & Security“.[8]

The German Bundeswehr also attempts to root itself in the heads of young people via the media. Several times every year the Bundeswehr organises youth press congresses for young editors of pupils' magazines. The pupils are then supposed to write an article about their visit to the Bundeswehr, which will be printed in the magazines. The medical service of the Bundeswehr wrote in December 2010 quite openly about the purpose of such a youth press congress: “For both sides the event was a win-win situation. The pupils had the opportunity to further develop their journalist experience, and the Bundeswehr receives products for use in its recruitment – produced by young people for young people”.[9] Also through paid adverts in large commercial pupils magazines – with a distribution of one million copies – the Bundeswehr attempts to win new recruits.

In recent years the expense of recruitment by the Bundeswehr increased massively. In 1998 the government spent 9.2 million Euros, but in 2010 this shot up to 27 million Euros.[10] And many of the expenses are not included in this. With the suspension of conscription, the promotion of the Bundeswehr to the public will increase even more, because now new recruits need to be found from completely outside the walls of the barracks.[11] And if young people can't be convinced to take up arms themselves, then at least they should be convinced of the need for military interventions: the military leadership and the government want to turn the Bundeswehr into an actor operating globally, and aim long-term for the creating of stable political support within the population. Therefore, they focus their agitation on (still easily persuadable) young people – tomorrow's voters. And Defence Minister Karl-Theodor zu Guttenberg (CSU) knows where to find the young people: “the school is the right place to reach young people.“[12]