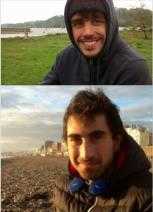 There will be many changes in the WRI office this year. Firstly, we say goodbye to Javier Gárate after ten years working in the office. There will be a chance to say goodbye and thank you to Javier next month! Taking over from Javier as WRI's Nonviolence Programme Worker in mid-February will be Andrew Dey.

Also for the first time, thanks to support from the Joseph Rowntree Charitable Trust, we are able to appoint a part-time staff person dedicated to the Countering the Militarisation of Youth Programme, which up until now has been part of the Right to Refuse to Kill Programme. Semih Sapmaz will be starting 2 days/week in the WRI office from February. We will be fundraising to ensure this role continues beyond the one year we have already funded.

I’m originally from Turkey and living in the UK for more than a year now. I recently completed my MA studies in Human Rights at the University of Sussex. Prior to moving to the UK, I worked as a project expert at the Middle East Technical University (METU, Ankara) -where I also got my previous masters degree in Political Science-, and took part in various research projects. Aside from my paid work I was also involved in LGBTI activism in Turkey and campaigning against discrimination based on sexual orientation and gender identity in higher-education. Currently I’m part of a research team in the project “Facing Legal Aid Cuts: Experience of Accessing Justice in Need” at Toynbee Hall, London.

I’m looking forward to joining WRI as the Countering the Militarisation of Youth Programme worker in February. As both an activist and a student of social sciences following WRI projects and publications for a long time, I’m thrilled to be given the privilege of being part this great network. I do believe in the critical importance of addressing youth militarisation in particular and I am strongly willing to nurture the programme, and improve it further in scope and content. I am also delighted to have been given the opportunity to work with and learn from the activists all around the world working against militarisation of youth.

I'm Andrew, from the UK, and from mid-February I'll be the Nonviolence Programme Worker in the WRI office in London. I've been involved in the peace movement here for several years, and it's a real privilege to know that soon I'll be working for WRI from the office in London again.

Last year (from September 2013 to August 2014) I worked for WRI through a programme run by the Quakers, putting together a new edition of the 'Handbook for Nonviolent Campaigns', and it was great working with the WRI network on this project, and meeting some people in person at the conference in Cape Town. During that year I was also working a day a week for Action AWE, a campaign which targets the production of nuclear weapon factories of Burghfield and Aldermaston, running nonviolent direct action trainings around the country for those considering taking part in some of our actions. I'm looking forward to the 'Burghfield Lockdown' action in early March, where groups from across Europe will attempt to block the gates of Burghfield AWE.

More generally, I completed my studies in Politics and Peace Studies at the University of Bradford in 2012. As part of my degree spent nine months volunteering at various projects in Central America, including at a permaculture project near Suchitoto, in El Salvador. My dissertation was about the way peace activists in the UK conceptualise violence and nonviolence. Though I've been particularly involved in anti-nuclear and anti-arms activism in the UK, I also like to think of my interest in food growing as a part of my activism, too; I have a keen interest in permaculture, organic growing, and food politics.

I'm looking forward to seeing somewhere - in the WRI office, at a nonviolence training, at a meeting somewhere... - soon!