Ferda Ulker, one of the first Turkish women to publicly declare herself a conscientious objector, writes about how gender and militarism intersect in the particular context of Turkish society, though her insights also have a broader application for any  patriarchal  and militarised society – which is to say, most if not all societies.

The subject of this article is the importance of gender awareness in conscientious objection movements.  However, before examining the basis of the matter, it is illuminating to touch upon the meaning and importance of women’s conscientious objection, in this case through the lens of the Turkish experience: the concept of gender is an area that has been given a great deal of thought here, though more by feminists and lesbian, gay, bisexual and trans (LGBT) activists than mixed groups. 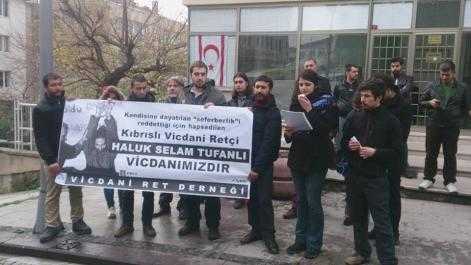 Women’s objection is not a phenomenon arising from their innately ‘peaceful nature’.  This understanding, in addition to any political arguments against it, is contrary to scientific facts. Women can base their political decisions either in peace or in war.  It is sometimes asserted that women are inherently peaceful because of motherhood, but even if this were true, no one can automatically become a mother just because she is a woman, so women cannot automatically be denominated  ‘peaceful’.  This does not only apply to women: no one is born with their political preferences.  But women and (other) LGBT people are particularly familiar with the concept of militarism, which is based on submission, body and soul, to another’s will.  There is also always an attempt to gain such control by patriarchy and its gender roles.  Militarism's main expectation of men who are subjected to conscription is similar: the conscientious objector Vedat Zencir  says  that ‘conscientious objectors perceive military service as suicide of the self’.

The military, and military service as an aspect of militarism, is only the tip of the iceberg.  In fact, below the water line there is  invisible militarisation.  This invisible part is the driver behind visible militarisation i.e. military and military service, and it is integrated into the social fabric.  A conscientious objection movement which disregards this dimension renders its ongoing struggle imperfect.  When the invisible part of the iceberg is questioned, conscientious objection, as a political act, gains a wider recognition and practice.  Within this conception and practice, women and (other) LGBT people's conscientious objection becomes more understandable. In this invisible section of the iceberg we also confront social facts, such as patriarchy and gender roles, which maintain militarism.

Patriarchy tries to create oppressive forms of belonging by disregarding individuals’ will over their own bodies and sexualities.  One of the priorities of both feminist and LGBT movements is often the protection of both the body and of identity.  Militarism cannot tolerate any will against itself.  Similarly, patriarchy cannot tolerate women and any will based on womanhood either.  It is seen as a threat. This is a nightmare for both militarism and patriarchy.  It must be kept under surveillance, monitored, and any awareness must be confronted.  Any refusal of the mandatory and oppressive forms of belonging results in social exclusion.  The ‘otherness’ which is created by this patriarchal system feeds hostility and fear.  Consequently, LGBT people, conscientious objectors, and women who voluntarily confront being 'othered' by society, can often understand each other.  The solidarity network of the conscientious objection movement against social exclusion and otherness has a vital importance.

In Turkey, MOTHERland is the motif most commonly applied to that primary concern of all militaries: the 'protection of territorial integrity'.  The homeland is mother, woman, and honour, and honour must be protected!  Indeed, this honour is supposedly so important that its protection cannot be left to women.  We are expected to be the 'heroic mothers' of soldiers who are to be sent into the arena, and to give birth to boys in the first place.  We are expected to be patriotic enough to sacrifice these sons for the homeland, and to applaud those who win in their fight with another state’s homeland.  Rape is viewed as legitimate if it is committed in the 'enemy’s' homeland, but it is a 'loss of honour' in our own.  This mostly affects women.  Women might also be asked to 'satisfy' soldiers sexually.  These immoral demands of militarism can be accounted for by the cooperation between militarism, patriarchy, and gender roles.

Militarist society is immoral because it is authoritarian and hierarchical.  This structure can be seen within our  homes.  While the father is the house commander, sons, mothers and daughters are, in accordance with the age hierarchy, soldiers.  Commanders/ fathers, whose demands are performed without quetsion, are the most prominent figures.  Women's bodies and sexualities are under the command of their husbands/ fathers.  It does not matter what women want or do not want: this is a question of duty and they must performed upon command and whenever the commander asks for it.  Who can do that without ignoring their own identity?  No one.  In a family which attaches particular importance to sons, they are still only accepted as 'real men' after they have performed their military service.  In fact, every house is a little barrack.  In Turkey, people ‘do not marry their daughters to those who have not performed their military service’.  A man can only be seen as a 'real man’ and get  married if he performs military service.  In this understanding, a man is expected to behave like a military commander and be commander of his wife and children.  Therefore, the situation is no different to the military in his house and although the picture I paint is of the Turkish household, many women will identify with parts of this experience, even those in less obviously militarised societies and where women are now supposedly more emancipated.

Schools, which are the first 'official' place of  socialisation for kids, work to a military order as well.  The first thing we learn, before the alphabet, is to obey orders.  Disobeying orders requires punishment.  The punishment method, which mostly entails violence, works like the method that destroys the self of a soldier.  We are expected to obey without any questioning.  Moreover, the streets can tell us how militarised a society is.  Streets and parks are named after 'martyrs'.  Statues are built to these 'martyrs' in city squares.  Significant parts of cities, mostly the centres, are surrounded with wire fence.  It is not just forbidden to enter these buildings, even taking a photo is not allowed.

In homes, on the streets, at work: militarism is everywhere!!!

Patriarchy collaborates with militarism.  Within this system, which puts men at the centre, women are given a secondary role.  In patriarchy the ones who have a right to speak are men.  It is a world which keeps women in the background even though they undertake so many tasks.  Militarism as a patriarchal system does not only ignore women, however.  It also ignores LGBT people (including LGBT women, of course).  Same sex attraction is seen as a disease and must be treated. Same sex attracted people are exposed to social exclusion as a result of the ‘rotten reports’ of militarism in Turkey, which are given to gay, bisexual, and disabled men to exempt them from military service (see more in following two chapters).  Furthermore, LGBT people are not accepted as natural aspects of social life by the patriarchal system.  While women may be seen as elements that can ‘somehow’ be handled, same sex attraction among men questions manhood and breaks the established order.  Both militarism and patriarchy are afraid of all women, whether LGBT or not.  But they are also afraid of LGBT men, and people with non-binary gender identities, who threaten the concepts of 'manhood' and 'womanhood' as defined by the system.

Gender roles collaborate with militarism.  Gender is a social phenomenon which uses the sex we are assigned at birth as the basis for roles that are taught and expected to be accepted without dispute.  The approach of patriarchy, which  puts men first, creates the model for being a woman or a man through gender roles.  This approach is expected to be accepted blindly.  Questioning these roles coercively assigned to us disrupts the social order.  During the distribution of these roles men are associated with authority and the public sphere while women are associated with the ‘private sphere’ and lack authority.  The entire social domain of life is shaped in accordance with these role models.  What this means for women is shouldering all housework, taking care of children and old people and obeying the head of the family, its 'commander'.

What do gender roles tell us?  They determine what we can and cannot do as a man or a woman.  Our job, the places we can go, the clothes we can wear, our toys, who our intimate partners can be, where and how we can laugh, when and how we can be involved in public life, etc., etc.  Society has already determined everything for us according to whether we have been designated 'men' or 'women'.  The only thing that we can do is fit into these roles.  The similar control mechanism established over women through gender roles can be seen in superior/ subordinate relationships between members of different ranks in the armed forces.  Just like women, subordinates do not have the right to speak.  They have to obey orders without questioning them. Without the hegemony of violence, neither gender roles nor militarism can be maintained.  There must be constant fear in order to maintain 'the system’.

The foundational concepts of militarism are: hierarchy, authority, power, unconditional obedience, and chain of command.  We confront all of these in patriarchy and its gender roles too.  Militarism, patriarchy, and gender roles constitute the corners of a triangle, which have a vital importance in maintaining each other.  As a matter of course, there is no place for women and (other) LGBT people in these corners.  Staying inside of this triangle and performing the roles appointed to us as women is extremely important.  In fact, everything is considered to be for our 'honour'.

Militarism is afraid of women and wants to keep us under control through patriarchy and gender roles.  It is natural for a system which is executed over women's bodies and sexualitie to be confronted by a movement whose most active members are women.

We women, the others of society, we conscientious objectors, and we LGBT people can create a world that includes us only through solidarity and encouraging ourselves.  You might 'somehow' refrain from serving in the army.  However, you cannot be outside of the militarist world which suppresses and regulates us all, especially women.  In that case what we can do is fight and make something change.  Another world is always possible.

(I would like to thank to Asli, Aynur, Ayse, Canan, Gulsen, Vedat. I am so glad to have their support.)

Translated from Turkish by Demet Catelkin