Mark Romankov, aged 22, had attended university in Germany for some prior to 2022. It was during the days just before the invasion of Ukraine by Russian troops that he returned to Germany – and sought asylum just there soon after.

How did you learn about the launch of the invasion?

In February 2022 I returned to Germany. News about the preparations for military invasion had spread even before February 24 – yet I doubted the invasion would really happen. I had reckoned the situation would be like 2008, during the Russian-Georgian military crisis, when the question at hand was whether Georgia would join NATO. I suspected a similar military sparring to evolve. Yet, awaking on February 24, I received news from my girl friend’s parents in Kiev that warring had begun.

Nevertheless, even then, I assumed the fightings to end soon. But just days later, it became clear that this will be a long period of war. That is why I decided not to go home to Russia. And when my visa expired on April 30, I finally sought asylum.

Could you be recruited to serve in the war?

I was alarmed after watching news reports about conscripts being sent to the war zone in Ukraine during their one-year term. The Russian Federation claimed only professional soldiers would fight, but in reality, things were different. I have learned that the situation is even worse than I thought as conscripts lose their lives there.

Why do you refuse?

The army still is a military in a soviet fashion, and I don´t want to support such a system. There is even more to it since the beginning of the war. Now, the army has become a symbol of the evil. There is nothing to be proud of.

As for me, it is important that my partner is from Ukraine, as are her parents. I just cannot imagine how to serve in an army and fight their family. That is completely unthinkable.

How did your family react to your decision? 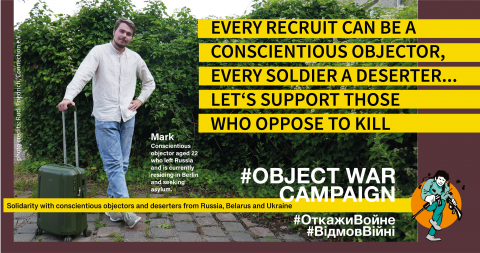 My family is strongly related to Russia and has been a victim of the powerful propaganda machine that has been explaining the world to her for eight years. I did not tell my parents the complete story because they would not be able to understand.

What are your hopes for the future?

My biggest problem is my citizenship. I hope, I can get rid of it. I do not want the Russian state to ruin my life.

What could be done in support of other Russians who are fleeing from the military?

At the asylum shelter I found their main problem to be the lack of information. I speak German and English, that is why they very often asked me: Mark, what is it they said? Would you please ask them one or another thing? A translator is not available anytime, there. Furthermore, he is not familiar with procedures concerning asylum seekers. In my opinion, it would be of much help for Russians fleeing the military if they were provided with more information and facilitation to organize and help themselves.

Do you think it would be possible to actively resist the war by supporting deserters and those who flee military conscription?

Yes, I think so. It would be very good if Germany launched a program to support Russian deserters and grant them asylum and promote them. Yet, Russia will react quickly to this move by closing its borders.

I suggest to take a rather silent approach of support. That applies as well to programs helping university students who are still coming to Germany. This soft power would have very much impact because many of those who leave Russia today are people of great potential with them, which Russia would then lack.

Those people I got to know at the asylum accommodation, were really opposing the war, even those who came from Chechnya and from regions where things are hard and rough. So, we developed a common understanding of the situation. I knew about their feelings just as well as they knew about mine – we are all Russian who are losing our homeland.