Alexia Tsouni, President of EBCO and one of editors of the report, said “Europe was not a safe place in 2020 for many conscientious objectors in several countries. Conscientious objectors faced prosecution, arrests, trials by military courts, imprisonments, fines, intimidation, attacks, death threats, and discrimination.”

Tsouni said  “These countries include Turkey (the only CoE member state who has not yet recognised the right to conscientious objection), and consequently the Turkish-occupied northern part of Cyprus (the self-styled “Turkish Republic of North Cyprus”), Azerbaijan (where there is still no law on alternative service), Armenia, Russia, Ukraine, and Greece”. 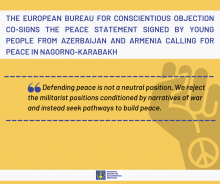 EBCO’s Annual Report also highlights the lack of necessary protection for conscientious objectors seeking asylum in Europe. Tsouni said “refugees are not granted international protection as they should. For example, a refugee from Azerbaijan who applied for asylum in Belgium on grounds of conscientious objection to military service had his application rejected, including his appeal.”

EBCO report also draws attention to the fact that a disturbing number of states across Europe continue to recruit under-18s to their military, despite the standards set by the Optional Protocol to the Convention on the Rights of the Child. “Worse”, EBCO reports, “some breach the absolute prohibitions in the Optional Protocol by placing servicemen aged under 18 at risk of active deployment, or by allowing conscripts to enlist before their 18th birthday.”

The report also includes updates from Azerbaijan and Armenia regarding the military conflict in Nagorno-Karabakh, including a number of peace statements by groups from Azerbaijan, Armenia as well as Georgia.