The Spanish edition of the CO book is out!

The book "Conscientious Objection: A practical companion" for movements was published in its first edition in English in 2015. The Right to Refuse to Kill programme made this book as a tool that conscientious objection movements and groups could use in their own campaigns and grassroots work. The book tries to approach conscientious objection from different perspectives, covering its history, analysing it from race, class and gender perspectives, and proposing some action strategies. It also shows case studies from different countries such as Colombia, South Korea, Chile, Spain, Turkey, the United States, among others.

In its entirety, this book is a valuable tool, personally, because it takes into account the systems of oppression when it comes to conscientious objection and antimilitarism. It also highlights women's role in conscientious cbjection and explores other ways to object beyond conscription and military service.

LAUNCHING EVENT OF THE SPANISH EDITION IN BOGOTÁ (COLOMBIA)

For this launching event, we invited four speakers to share their thoughts on the book and in general on Conscientious Objection in Colombia: Gloria Lopera (Lawyer), Roxana Sefair (Sociologist and Feminist), Oscar Vargas (BDS Colombia) and Lukas Pardo (Conscientious Objector and ACOOC co-founder). After their presentations, we talked about the potentialities of conscientious objection as a strategy to build peace and resist war and militarism. 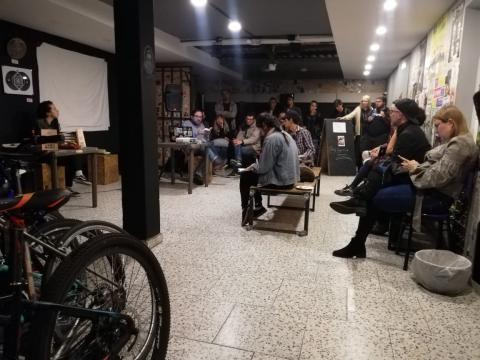 These were some of the ideas and questions shared during the event that are worth mentioning. First, we have seen how grassroots organizations' work towards the recognition of conscientious objection has been essential for young people to decide whether they want to do the military service or not. However, in Colombia, we can identify some political parties and movements that have attempted to use conscientious objection for institutions, so they can object, for example, to not practice abortions or to officiate unions of same-sex couples. This, as mentioned in one of the presentations, shows a setback in the way the legislation is being enacted in the country. A right that should have benefits an individual, could be used by groups or institutions to deny other rights already recognized.

Second, understand conscientious objection beyond the military or the military service and how important it is to continue exploring other ways to object to war and resists its dynamics, e.g. tax objection. Also, understand that the right of conscientious objection shouldn't end when young people define their military situation or get the military card, at the same time it can be a strategy that helps strength antimilitarist movements and all the campaigns it carries out, even if military service is no longer compulsory.

Third, recognising the relevance of the gender analysis when we talk about militarism and conscientious objection. Not only-but also keep asking how women and other “minority” groups are affected by war, and how they resist it. Finally, understand that conscientious objection is “a concrete political action that allows young people from all over the world to refuse to kill, but also an invitation to continue building non-hierarchical relationships, to overcome misogynistic and patriarchal practices and confront violence ”

It was very valuable to listen to the speakers and to those who attended the launching event. Of course, the conversation does not stop there. We hope to have more opportunities  (we are sure we will) to continue reflecting on conscientious objection and finding new ways to support objectors all around the world.

If you are interested in reading the book, you can buy it's English edition here. Soon we will have available the Spanish edition in our shop. Check our social media for more updates.