In Chile in October 2019, a historic social uprising took place, unexpectedly for the vast majority. More and more people were joining the protests every day. One of the protesters main demands was to repeal the Chilean republic’s current constitution, which was written during the civilian-military dictatorship of Pinochet. The current constitution forbids many changes that would benefit the poorest segment of the population. Chile is considered, within the Organisation for Economic Co-operation and Development (OECD), the country with the highest levels of social and economic inequality.

The current government, led by the multimillionaire businessman Sebastián Piñera, tried to soften and ease the diffuse protests that occurred almost every day, up until the beginning of March 2020. Those attempts were so clumsy from a strategic and political point of view that finally a state of emergency and curfew were enforced. This resulted in the presence of the military on the street, reminiscent of the dictatorship era.

The president, Piñera, said that Chile was at war with a powerful enemy, but he did not specify which one. In fact, he was declaring war on the most oppressed Chileans, who were resisting the inequalities and constant thefts committed by multimillionaires from almost every statewide institution. White-collar theft in Chile does not lead to prison sentences. On the contrary, as happened in the Penta Case (in which employees of a holding company called Grupo Penta and the Chilean National Tax System committed tax fraud, and used the funds to support far right politicians election campaigns), the sentences given the businessmen Délano and Lavin for defrauding the tax office of around $25 million was assisting in ethics class at a university.

This is one example of the mockery of the legislative, judicial and executive branches, and such millionaire theft has been taking place over the last 30 years, since Chile’s return to democracy. The people could not put up with any more injustices while inequalities were increasing even more.

With the military on the streets, working alongside police officers, demonstrators in Chile began to face huge amounts of repression, including shootings at point-blank range, disappearances, and torture and abuse in police stations. More than 350 suffered damage to their eyes; many ended up blind completely or in one eye. Through out this period the government ignored the protests and treated the demonstrators as delinquents.

In March, as these events continued to unfold, the first Covid-19 cases appeared. As the number of cases went up and fear overcame the population, the government saw a great opportunity to move attention away from the protests and toward the health emergency. Even if in the last months of the protests the military was no longer patrolling the streets, the first health measure was to bring them out again. Another state of emergency, and curfews between 10pm to 5am (the period with the lowest probability of infection) were declared. Right-wing analysts claimed that Covid-19 was a stroke of luck for the government because they took advantage of the situation and started giving speeches about the efficient disease control measures and the prompt return to “normality”. Afterwards, the Boinas Negras appeared on the streets. The Boinas Negras are an elite military command trained for very specific war scenarios. Why were these specialized military units patrolling the streets during a pandemic? The repression returned and was well justified because the fear of becoming ill allowed terrible things during the state of emergency. At the end of March I watched the news on TV, and saw a driver was shot because he did not respect the identification control, and an acquaintance of mine who took longer to get home than expected was obliged to do push-ups with guns aimed at their head.

The use of the military is justified in exceptional situations, like the one we are facing now, but in Chile it was incredibly convenient for the government. As the disease spread to the poorest areas of the country, the cases escalated quickly and ran out of control, because most people must go to work so that they can survive day to day. A couple of days ago, the same people in those areas started to stop following quarantine rules, and went out into the streets to protest but, this time, they specifically mentioned that they did so out of starvation. The demonstration was roughly repressed and the government started to give speeches about the manipulation and the use of economics resources by the left wing in order to start the riot. This means that even in the worst scenario, where the people, out of hunger, confront police officers and military, the government try to give it a political angle. 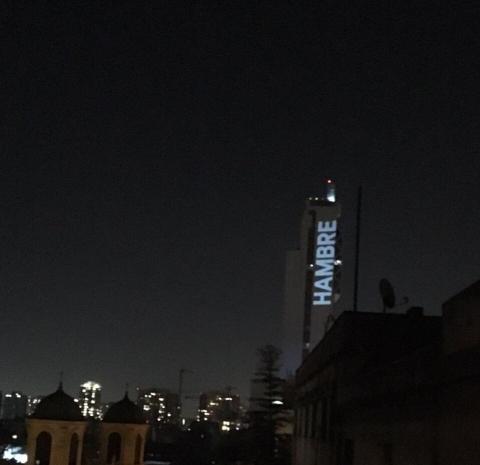 During these protests, which began in October, some artists projected texts supporting the demonstrators ono a big building owned by Telefónica. The same people recently projected on to the same building one big word: Hunger. One of the symptoms that we can identify about the emergency state was a strict right government with military on the streets is giving out speeches as in a dictatorship. In May, Deputy Schalper asked the prosecutors to investigate those who projected the messages on the building. Freedom of speech is one of the characteristics of a democracy, but instead politicians are demanding acts of free expression are monitored and punished, instead of worrying about the real problems, like the hopelessness of the growing number of people who are literally starving. When these communities protest they are repressed, both politically and by the police and military, being treated, as in October, like vandals.

In the same areas where the people are starving, the community are restarting a movement that has not been seenin the country for 30 years, the “common pots”. Communities are gathering to cook and share the food in the nearby neighborhoods. This is unparalleled - in an extremely neoliberal country, this was unthinkable until this emergency.

At the beginning of 2020, the Chilean State invested more than 2,000 million dollars in police infrastructures and arms. Nowadays they are running out of mechanical ventilators and they did not invest the amount of money in the Department of Health that they originally announced. When they invested in weapons of war, it was already clear that the new coronavirus will arrive to America. Chile, as a poor country, preferred to invest in its military.