How to win friends through killing people

In June this year, the UK will celebrate its annual Armed Forces Day, a national day of celebration praising British troops and their role in the world. The chosen town for the focus point of national activity, with members of the royal family visiting, an enormous parade and a military themed family fun-fair, is the medieval and heavily militarised town of Salisbury. While the national event is always the biggest, smaller events take place across the whole of the UK.

Beside being an obvious attempt to scale up the enthusiasm and support of the British public for the military and defence foreign policy, initiatives like Armed Forces Day also work to inspire children and teenagers in particular to pursue a career in the British military.

Hence the ‘family fun’ nature of the day where funfair rides, arms company stalls and military vehicles and weapons are intermingled; soldiers run activities for kids who are encouraged to have a go at climbing on tanks and aiming machine guns.

Indeed throughout the year, citizens across the country may walk in their local town or city centre and find a military presence with decommissioned weaponry and military vehicles for children to play on, while they give away recruitment literature on their stall. British pupils may find their school is visited by the military delivering a career presentation touting the benefits of life in the armed forces; should they wish to do so, they can leave school early and join military training at the age of 16.

Then, when they get home from school or listen to the radio, children and teenagers - especially those from low income backgrounds - may be strategically targeted with sophisticated military recruitment advertising on which around £27 million of public money is lavished every year. 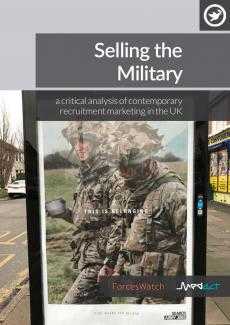 These adverts emphasise self-development and positive prospects to young people who are facing precarious futures. They present the military as an incredible career path full of opportunities, support and a fun, inclusive working environment. They promise that young people will be ‘made’ in the military - they will become fit and healthy, they will be confident, powerful and respected. Moreover, they will make friends for life in an environment of camaraderie and bonding like no other.
The dubious truthfulness of such claims is explored in a recent report called Selling the Military, published by ForcesWatch, which monitors the UK military from an ethics and human rights perspective; and Medact, a UK-based public health charity.
The report details the stark gap between recruitment marketing campaigns and lived reality for many recruits. It also critiques the eerily imperial feel to the British military’s pattern of selling self-development to recruits in the UK in the context of war and armed violence elsewhere in the world.

While events like Armed Forces Day often glorify and normalise armed violence by presenting weaponry as fun, appealing and exciting, recruitment adverts cement this theme. Some adverts omit any scenes or references to armed violence and instead present the military as akin to an adventure holiday with activities like kayaking and swimming with dolphins. Others intersperse fast-paced scenes showing self-development though fitness and career progression, with live firing, weaponry and conflict scenes. One recent British Army advert even features a young teenager addicted to gaming, and promises that his gaming skills will be useful on the real-life battlefield; no longer will he be stuck inside, antisocial and worrying his parents - but he will be valued and useful for the projection of British armed force.

Academics Paul Higate and Nivi Manchanda wrote in the report: ‘The centring of ‘making’ people in these advertisements cleverly conceals the ultimate destruction of lives central to the use of military violence.’

In a context where a militarisation offensive has been working to shape the British public’s relationship with the military, military marketing also works to promote and normalise the armed forces within society more generally. This launch of the British Army’s new recruitment campaign in January 2019 was in a way designed to cause maximum public debate.

The report presents a new framework for assessing military marketing in the light of recent understanding of the risks associated with military service for adolescent recruits; and the need for regulation around marketing products towards young people when risks are involved.

We hope this will take forward debate about military marketing with more protection of young people as a result.

Young people in Britain face an increasingly precarious future, and xenophobia is on the rise; it is vital that we encourage critical debate about any attempts to normalise armed violence and present the destruction of human lives as a platform for the ‘self-development’ of British young people.