France: Activists from Europe gathered at the Antimilitarist Camp in Paris

From November 1st to November 3rd, 2019 a group of activists from France, Italy, Spain and Switzerland gathered to discuss militarism in their political, social and everyday lives. Conscientious objection, among and in relation to other topics, was central to the discussions at this Antimilitarist Camp in Paris. An exchange of experiences and knowledge on militarism, and how it can be reflected in language and sexism were also included in the agenda, plus, other conversations around different ways of refusing and create antiwar dissent.

"These 3 days were stimulating: we’ve met conscientious objectors from Turkey who refused to take part in compulsory military service for different reasons. We’ve met the Italians who are fighting against the oppressive system of the mafia, and its violence in various forms. Also, we’ve listened to testimonies of Spanish people who refuse the new law which imposes and legalizes discrimination in access to health service."

Some of the topics that the activists would like to work from now on (through workshops, trainings, publications, experience and testimony exchanges), include: responsibility in individual or community level around conscription, sexism, machismo on a daily basis; how to continue working around antimilitarism after refusing, escaping or performing military/civilian/cultural service; how language has an impact on the perception of their reality; how to challenge the negative narratives around antimilitarists and conscientious objectors; how technology is being used for the war; and the importance to remember and recall the names of all the activist and COs that have been imprisoned or killed because of their work against war. 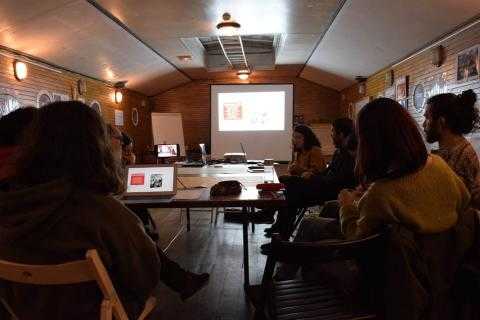 After these three days, the group decided to work on constructive actions, proposing alternatives to war through arts, pedagogy and research and to continue finding and creating new strategies to approach young people and get them involved in their actions and activities.

These are some of the reflections shared by the participants of the event:

“For us, the fight against the violence of the States, the actors who hold the power, and also the violence in daily life, is going to be held through the human factor, by those who refuse the prejudices and stereotypes created and diffused by the possessors of power; by those who simply say NO, just like today in Rojava or elsewhere, "No, another life is possible", and together we will build it. And to build this new life, we would like to highlight the role and the responsibilities of the European citizens and the citizens of the NATO member countries; we would like to remind their role concerning arms trade, concerning laissezfaire policies linked to corrupt, dirty and unhuman migration policies and oppressive internal policies (so-called "anti-terrorism" policies).”