Actions against arms fairs around the world

Activists have resisted and challenged arms fairs and exhibitions in Canada, Czech Republic, Israel and Spain in recent weeks. Arms fairs play a key role in the sale of weapons around the world, offering prospective buyers opportunities to browse equipment, make contacts, and discuss deals, and allowing arms companies the opportunity to display their latest technology. The Omega Research foundation lists dozens of arms fairs around the world, which often are organised by states to showcase domestic arms companies. Use their mapping tool to find out when arms fairs are taking place around the world: https://omegaresearchfoundation.org/resources/arms-fairs 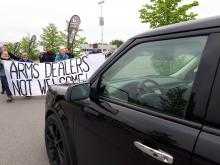 CANSEC is the largest arms trade fair in Ottawa, Canada, and welcomes "600 VIPs, generals, top military and government officials" and "40+ delegations from around the world." CANSEC takes place every two years, most recently in late May 2019, when 100 protesters – including those affiliated with Extinction Rebellion and local city councillors - took part in early morning blockades of the exhibition centre where the event was being held, with activists repeatedly entering the road to briefly delay vehicles trying to enter the exhibition.

IDET is a biannual fair held in Brno, Czech Republic, and claims to be one of the largest arms fairs in central Europe. Members of WRI’s affiliate NESEHUTI took action outside the fair, holding a die-in and delivering speeches. The group also produced a video for Facebook, showing the inside of the fair, including people browsing hand guns and testing a range of weapons. 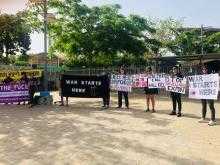 ISDEF takes place in Tel Aviv and is Israel’s largest arms fair. ISDEF showcases arms manufacturers from around the world but especially – and unsurprisingly – Israeli military technology, and is supported by the State of Israel Ministry of Foreign Affairs, and the Ministry of Economy and Industry. The fair most recently took place from the 4-7th June, with activists from the Hamushim (“Armed”) organisation, Coalition of Women for Peace, and Amnesty International holding banners and signs reading “war starts here”. Representatives present at the ISDEF fair included members of Myanmar's military, despite the country facing international sanctions.

FEINDEF took place in Madrid in late May. Members of WRI affiliate Alternativa Antimilitarista MOC, alongside members of Desarma Madrid, BDS Madrid and Ecologistas en Acción displayed banners while holding a die-in outside the entrances of the fair, using bike locks to delay their removal by police – several members of the group were arrested while police pulled down the groups banners.