Young people are reviving the spirit of resistance in Eritrea

Overnight Eritreans begun repeating one name: Haj Musa Mohamed Nur, whether in support or opposition of him. He became a household name both at home and abroad after the Diaa Al Islam School uprising on the 31st October 2017. The school’s students and their mothers marched from Akhria, where the school is located, to Huriya Street in the centre of Asmara, where the ministry of education sits. The demonstration and student resistance on that day became a historic event for a people accustomed to 26 years of submission with all government edicts implemented without any discussion or opposition. This uprising is the first popular movement to rebel against repression and the arbitrary edicts forced on them.

Eritreans suffered from colonialism and the occupation of their territory by a foreign power for decades until they rose up fighting a bitter armed struggle to control their land and own decisions. It was one of the longest-running liberation struggles on the African continent in the last century, lasting until the territory was liberated under the leadership of the Eritrean People's Liberation Front on May 24, 1991. It is impossible to describe the joy of Eritrean independence and freedom. Eritrea became known by its name in the world, and their flag was raised in international forums and the national anthem sung at every event.

The first downside of the Eritrean state, was that the men of the revolution still wanted to rule in the new state era. Since independence they held sway over the Eritrean people as they had credit for the existence of the independent state of Eritrea.

Having been through wars, displacements and suffering, the Eritrean people are known for their patience. Whenever they wanted to demand a decent life in their country, the men of the revolution would remind them of the sacrifices they made in the liberation struggle. As a result, they were left only to hope for changes or positive reforms. In countries that respect their citizens, individuals demand their rights through the ballot box and if that isn’t possible then its usual to go out and demonstrate for, or to reject government resolutions. However, the people of Eritrea are not used to acting in this way, especially those who lived through the occupation and independence. Even though there were demonstrations and protest against the rulings of the Ethiopian government, more clearly it was the young people who protested and objected.

In every place and time, young people are the fuel of liberation movements and behind crucial changes in the lives of the people. The ruling party in Eritrea, the Popular Front for Democracy and Justice (PFLP), realized this early. The Eritrean revolution did not falter for three decades because of the young people who flocked to the battle field, both individually and in groups. The first resolution implemented after independence, was compulsory national service for all those over 18, for a term of between 12 – 18 months.

In the 1990s this recruitment started after Secondary Certificate exams. Students then go to the recruitment camp in Sawa until their results are announced. Those who succeeded and achieve the highest grades are then taken out of the camp to complete academic or professional training. The rest complete their training until the end of their term and are then have the right to live their lives as they wish. This is how it appeared. In fact, the government was making border disputes with neighboring countries, and all conscripts, including those who had completed their service, were recalled as fodder for battles and disputes. Meanwhile, middle and high school students had to perform ‘summer service’ in areas far from their home towns and villages, and are only able to complete their studies with a certificate to prove it.

This means that the “Haqdaf” government assumes control over an Eritrean as soon as they leave childhood, at the stage when they are forming their characters. They are molded and refined to make a subordinate human, servile, afraid, obedient, not resisting and not able to form an opinion. From this perspective, Isaias and his party are the liberators and those who alone can rule Eritrea.

Between 1998 and 2000, Eritrea fought a border war with Ethiopia that resulted in about 70,000 martyrs, destroyed border towns and killed all that remained of the spirit of freedom and peace in Eritrean psyche. When Isaias’ comrades, government ministers, opinion makers, and thinkers called for the speeding up of the process of reform and political change put forward since independence, he turned against them and imprisoned them without trial in 2001.

In Ethiopia's lack of commitment to the 2002 peace agreement on their withdrawal from the Badme region of Eritrea and the demarcation of the border between the two countries, the government found a reason to change the methods of compulsory service. The Government argued that because of the state of war and uncertainty with her neighbour, and because Badme is still occupied by Ethiopia, Eritrea needs a large army that is always ready. Since 2002, young Eritreans began to be recruited before reaching the legal age of 18 years, and following that, a strange link was made between the Ministry of Education and the Eritrean army. Students are now forced to study the final year of secondary school at the Sawa training camp, in harsh living conditions and with a strict military ethos not suitable for young students. Now compulsory service does not have a specific length of term.

The conscripts serve in different areas of the state ministries. They work strenuous jobs such as building roads and cultivating land with primitive tools, with low financial rewards, only occasional leave and with punishments for trivial reasons, with the aim to abuse and subdue anyone who has the spirit of resistance. The recruiting officials master the variety of punishments that kill the spirit of young people early on.

They kill ambition and plans for the future.

They kill opinions, ideas, and vision.

They kill self-respect and self-confidence.

They kill pride and dignity.

Perhaps the ugliest thing I have heard is that a recruit was punished for being late to return to his squad by being forced to wash in his urine. Another was punished by digging a deep hole with his hands, and he was not allowed to leave until it reached a certain depth, and he slept and took care of his bodily needs in it. Punishments are not for discipline but for insulting and humiliating the conscript. This was for the young men. Punishments are developing with girls, making them servant to a military team leader, who can exploit them physically and sexually.

We find that young people have spent half their lives in service without any appreciation for their years they served, or even an end to them. There is nothing left for them, except to flee from Eritrea. An Eritrean aged between 6 and 50 years old is not allowed to leave Eritrea until he has finished his service, and he has no guarantee that he will not be asked to serve again. He leaves the country to escape. Eritreans are deprived of a decent life in their homeland, and are deprived of leaving with dignity from any port -sea, air or land- like travelers from other countries of the world can. The authoritarian rule the government is pursuing is apparently to prevent people leaving, but is actually pushing them to leave. This is a concrete plan to empty the country of the young people, the young people we know are the leaders of change in any society.

Instead of being known for their knowledge or work, or even for their trade, art or athletic superiority, Eritreans have become known globally as refugees. According to a report from Amnesty International for 2016/17 the United Nations High Commissioner for Refugees (UNHCR) registered 17,147 Eritrean asylum seekers in 44 countries, between January and July 2017 alone. 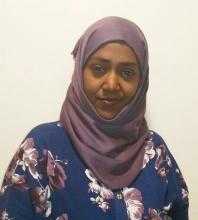 The years have passed quickly, and now the Independence Generation has been born and raised. This is a generation that did not see a ruler in their country that wasn’t an Eritrean like themselves, and that wasn’t represented by a dictatorial president. So, the image propagated by Isaias for three decades, of the hero liberating the country from occupation, was shattered in moments by the cheers of the students of Al Diaa School. They demanded their right to freedom of education and belief, and refused to submit to the government ruling ordering the removal of headscarves from female students and the imposition of mixed-gender schooling.

Haj Musa and these young people revived the spirit of struggle and rebellion against tyranny within Eritrea. Having broken the idol of the heroic liberator forged from fear, they are the spark of the change that Eritrea will witness in the near future.