Two years after the Peace Agreements in Colombia: More money for war?

Colombia is known internationally for its peace agreements signed in 2016 between the national government and at that time the FARC guerrilla. Although peace agreements do not guarantee the end of all conflicts and, least of all, armed ones in a country that has experienced violence for more than 50 years, it would be expected that the country's economic resources would be directed towards the agreements, the application of these, as well as being invested in other areas: rural development, education or health, to give some examples. However, the story has been different: an increase in military spending and a decrease in budget for other sectors (such as public education or rural development). Of course, this responds to a specific context, with a change of government and a projection of a General Budget of the Nation with particular interests. 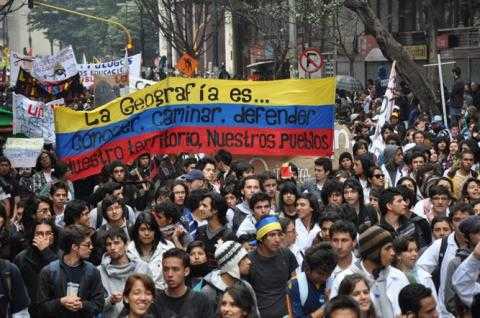 On October 10, 2018, a large student demonstration took place in many parts of the country. A student's manifestation that was not seen for 7 years, and although its demands were on this occasion similar to the ones they had in 2011, this demonstration was different. After the Peace Agreements were signed, with a change of government and a budget for militarization promoted by the latter in terms of "security budget", the students asked not only for a bigger budget for public higher education but also were critical to these new pretensions of continuing with war and to the increase of the militarization on the part of the government and its ministries: "Budget for education, no more arms or money for repression" said the Colombian students in this manifestation.

In 2017, Colombia spent more than 9 million dollars on the military budget (defence, weapons and support of troops) becoming the second in South America with this high expenditure after Brazil[1]. In the four years that the negotiation between the government and the armed group FARC lasted, even though there was a decrease of 98% in the armed actions, the military expenditure increased, according to the figures of the Stockholm International Peace Research Institute - SIPRI, to 43.258 million dollars[2]. 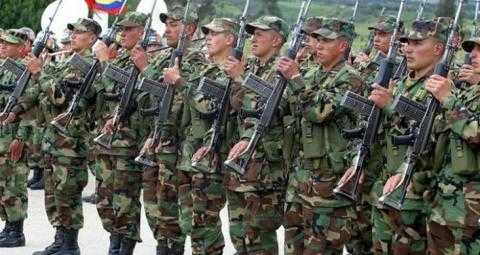 In 2018, after a month of possession of the new Minister of Defense, a budget for the defense sector of 1.1 million Colombian pesos was requested to the economic commissions of the Congress of the Republic, justified in a need to face the technological advances in a better way and to continue guaranteeing throughout the territory the defense "of life, honor and property of citizens." Some "tasks" that require the strengthening of the Armed Forces because, although the FARC no longer operate in the territories, it is possible that other threats may resurface or develop, said the Ministry. Similarly, it was argued that the increase in military investment during the process of the peace agreements and after the signing was because after the FARC left the territories it was necessary to return troops to these places where the Armed Forces had been absent, requiring a significant logistical expense.

Now, the new government of Colombia projected a General Budget of the Nation for a total of $ 258.99 billion Colombian pesos, of which the external debt would take $ 66.4 billion, education $ 38.7 billion, the Defense and Police sector $ 33, 6 billion and the health sector $ 28.48 billion.[3]

Looking at these figures we can see that a larger budget for Education is projected compared to the Defense and Police one. However, what cannot be appreciated in this figure is that public education has been underfunded for many years and, although the budget for education, in general, has been increasing, a large part of it has been directed to private funds and to projects that benefit private higher education institutions. What we must look at then is that military spending remains particularly high two years after the agreements were signed. It seems that the presence of the Armed Forces throughout the territory is still fundamental, as well as the investment in weapons and new technologies, making it impossible to speak of Colombia as a country that put an end to the war: the militarization of the territories remains and that is reflected in the high budgets that are still contemplated for the defence sector. It doesn't seem to be among the plans for the next four years a different use of resources, aimed to the application of agreements, public education, rural development of the country or improvement in the health system.