In Paris, activists from across Europe joined with French protesters to take action against the Eurosatory arms fair, a biannual event that in 2018 saw over 1,700 arms companies exhibit their products to 57,000 individuals from over 150 countries, including military delegations from across the world.

Present at the fair this year were some of the world's biggest arms companies, including BAE Systems, Thales, Elbit, Raytheon, CMI Defence, Lockheed Martin, and General Dynamics, alongside hundeds of smaller companies specialising in specific pieces of equipment or services. On display was a wide range of weapons and equipment used by militaries, including attack helicopters, fighter jets, tanks, armoured personnel carriers artillery, drones and other autonomous land vehicles, rifles, pistols, surveillance and communications equipment, crowd-control and “less than lethal” weapons. Other companies offered logistical services, training, simulators, and other equipment militaries around the world rely on. Over three hunded exhibitors focused on internal security and policing, with the fair organisers describing “security” as “a full component of Eurosatory alongside the defence sector. The duality of technologies on many stands and the opening of a new hall mainly dedicated to this field, attest the growing importance of security issues” and that “on walking through its aisles, the rapid growth in exhibitors in the field of security is evident. Alongside grey and khaki, the blue and the black of the police and gendarmerie… enrich the palette of usual colours”.

A number of simulations and live demonstrations took place during the event, with a dedicated driving course for land vehicles, and French military and police units taking part. Autonomous ground vehicles were exhibited, as well as simulated terrorist attacks on public transport. Dozens of members of the GIGN – a militarised French police unit armed with automatic weapons, full body armour and attack dogs – took part in a heavily choreographed display of an assault on a terrorist hideout, including a small drone being used to recce the scene before heavily armed police officers arrived in militarised vehicles. 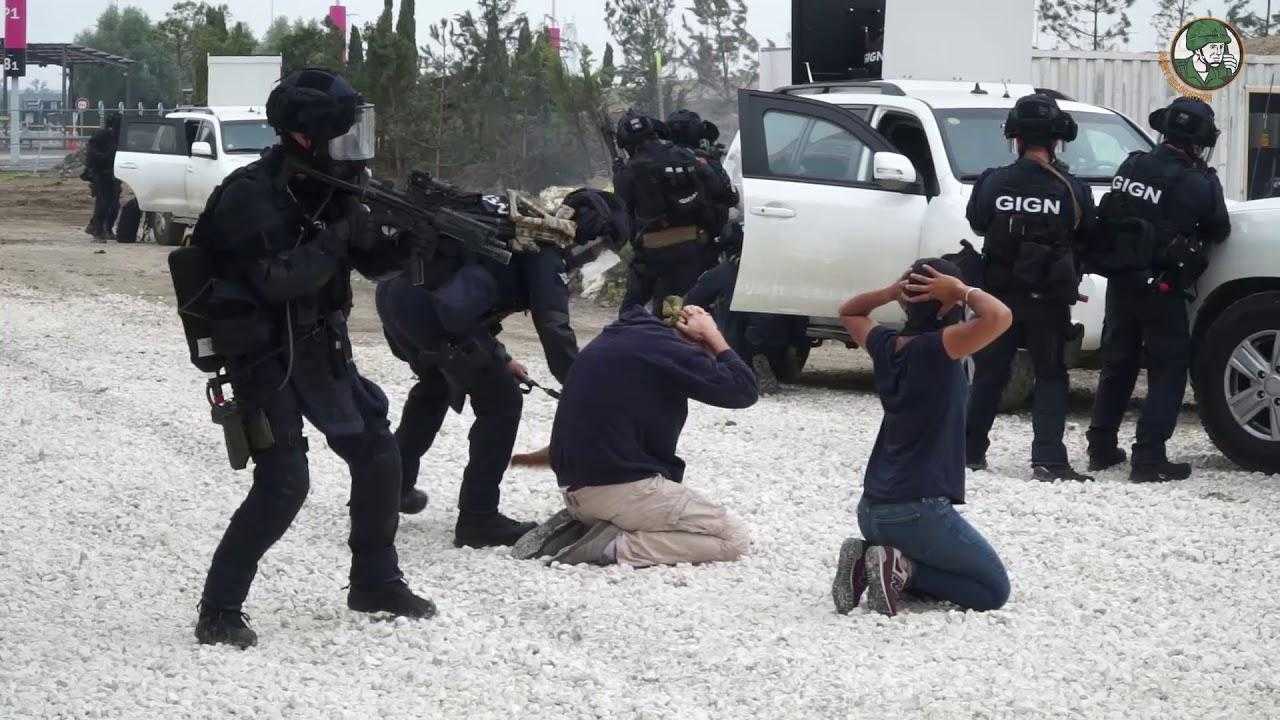 The last day of the fair was opened to students and young people, to “allow them a chance to discover the many jobs offered by the Defence and Security sectors.”

Protesters from across Europe took part in daily demonstrations and actions against the fair. Six activists disrupted one of the live simulations before being arrested. Others managed to enter the main lobby, holding up large banners condemning the fair before being led out by police. On the last day of the fair, a strike by French train drivers meant delayed delegates had to stand and listen to delegates describe the impact of the weapons sold in Eurosatory around the world. Throughout the week, protesters held vigils and die-ins immediately outside the fair, regularly being moved by police and security guards, and disrupting visitors entering the fair.

To support the resistance and protests, War Resisters' International published a short guide to some of the companies present at the fair. The guide covered ten of the companies attending the fair, the weapons they produced, the impact they had around the world, and the international networks that resisted these companies. You can view this guide (in French) here: https://www.wri-irg.org/fr/article/2018/que-profite-eurosatory