Across Europe, activists have been resisting arms sales to Saudi Arabia, destined to be used the ongoing war in Yemen. Saudi Arabia's bombing campaign has seen many thousands of civilians killed, with some countries – such as Germany and Norway - deciding to end arms exports to Saudi Arabia or other members of the coalition while the military campaign continues.

In January, Women in Black London have used their regular weekly vigil to protest arms sales from the United Kingdom to Saudi Arabia. The group meet at the Edith Cavell statue in central London every Tuesday, 6-7pm, handing out flyers and wearing placards. In 2017, the United Kingdom sold over a billion pounds of arms to Saudi Arabia, including aircraft components, missiles, and sniper rifles.

Also in January, 1000 people – including women from Women in Black groups from Bologna, Torino, Bergamo, Verona, Piacenza and Padova – took part in a march on the RWM factory in Ghedi. RWM produces bombs that have been sold to Saudi Arabia. The march was blocked from reaching the factory by police vehicles, but the activists hung banners and heard from speakers about the impact of the weapons being sold. The marchers also went to the Luigi Olivari airbase, where US nuclear missiles are stored. 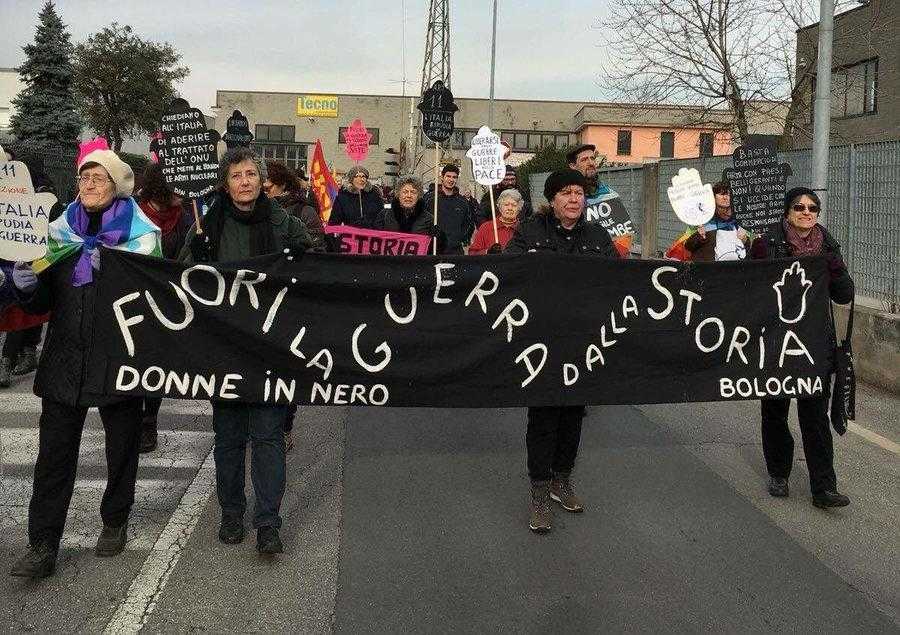 In Spain, activists from Greenpeace took nonviolent direct action to delay the Bahri Tubuk ship, a Saudi ship which specialises in the transport of weapons. At 9:45 on Friday 16th February, Greenpeace announced that activists in boats had entered the port Port of Bilbao and got in the water surrounding the ship, while climbers hung from the mooring ropes. Others were stationed on the outer edges of the port, also hindering the boats manoeuvres. Nine activists were arrested, and released later that day.