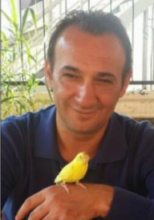 Early this week, War Resisters' International joined a group of international organisations to observe the hearing of Serdar Küni, a doctor and veteran human rights defender in Şırnak, Turkey. Dr. Küni has been kept in custody since October 2016, accused of being a member of the Kurdistan Workers' Party (PKK) under Article 314/2 of Turkish Penal Code. His first trial, attended by 70 observers, including six observers from Germany, UK, Sweden, Norway and US. took place on 13th March, Monday.

During the hearing, witnesses who initially testified against Dr. Küni revoked their testimonies stating that they were tortured by police during their testimonies and they actually didn't know Dr. Küni. Despite the witness declarations, the court decided to hold Dr. Küni in custody until the next hearing, due to take place on 24th April.

Serdar Küni, who was recently awarded the Peace Companionship and Democracy Award by the Diyarbakir Medical Chamber, is a medical doctor based in Cizre,a town of Şırnak in the Southeast of Turkey. He is the Cizre Representative of the Human Rights Foundation of Turkey (TİHV) and former President of the Şırnak Chamber of Medicine, and working as a physician In the town for several years, including during the curfews and intense fighting between Kurdish Turkish security forces and Kurdish guerilla in the early months of 2016. “It is my duty as a physician to treat every person who need treatment. But I never violated the law during my work“, he said during the trial last Monday.

However, the prosecutor accused him of “providing treatment to alleged militants” and not informing security services about it, and accused Dr. Küni of being a member of PKK. In order to prove these accusations, the prosecutor brought testimony from four witnesses. However, the oral statements of the witnesses in the court room showed how police and security forces were acting during the curfews. In Cizre, hundreds of people were killed during the armed conflict between the young Kurdish rebels and Turkish security forces. Tens of thousands of inhabitants had to leave the town. Today, a large areas of these neighbourhoods are destroyed, and houses have been expropriated.

During the trial, one witness after another declared that they had never met Serdar Küni, and don't know him. One witness described how he was coerced into signing a statement, which he was not allowed to read before signing. The other witnesses made clear statements that they were tortured after arrests by police and security forces. “They beat out a tooth, one of them reported, “then they dressed me in an explosive vest and threatened to blow it up. I signed, but nothing of it is true.”

In a closing statement, the defence described Serdar Küni's professional obligation as a a physician, that he was obliged to treat every person who needed medical help. In response to the testimonies from the witnesses, the defence called for the immediate release of MD Serdar Küni.

However, in his statement, the prosecutor said that he is still not convinced that MD Serdar Küni is not guilty, and applied to prolong his the custody. The judges followed his application and postponed the trial until 24th April to take place in Sirnak.

The trial was observed by around 70 people, including six observers from Germany, UK, Sweden, Norway and US. They were shocked about the decision of the court. “Following the Convention on Torture, a proceeding has to be stopped immediately if it‘s shown that testimonies are given under torture”, Ernst Ludwig Iskenius of IPPNW Germany said afterwards. “The testimonies clearly showed how brutal the Turkish security forces were acting during the war in Southeast of Turkey,“ added Rudi Friedrich who was coming to Şırnak on behalf of Connection e.V. and War Resisters‘ International. “It is terrifying that the judiciary is following the policy of the Turkish government in such a way.”

“The case of MD Serdar Küni is very important. We are so glad to get such huge international support”, emphasized Metin Bakkalcı of the Turkish Human Rights Foundation. The international observers demand the immediate release of MD Serdar Küni.“We strongly condemn the course of action of the Turkish judiciary”, Ernst-Ludwig Iskenius stressed. “Further on we are continuing to support the human rights activists in Turkey who are working under high risk of detention and prosecution by acting for a peaceful solution of the conflicts in Turkey” Rudi Friedrich added.